"It's cool. At least Hulu has a ton of other shows starring women of color we can watch. Oh wait," Zoë Kravitz wrote

Zoë Kravitz is not holding back on how she feels about the recent cancellation of her Hulu series, High Fidelity.

The 31-year-old actress called out the streaming service for lack of diversity in its programming after the series was canceled earlier this week.

After sharing an Instagram post in which Kravitz thanked the cast, crew and viewers alongside a slideshow of photos from her time on the series, actress Tessa Thompson commented on Kravitz's post, writing, "I will miss you alllllllllllll so much."

Kravitz replied, "It’s cool," before she added sarcastically, "At least Hulu has a ton of other shows starring women of color we can watch. Oh wait."

The series starred Kravitz in a gender-bending reimagining of the 2000 film based on Nick Hornby's 1995 novel that featured John Cusack in the titular role.

The show received acclaim from critics and viewers alike, scoring an 86 percent and 82 percent rating, respectively, among critics and audiences on Rotten Tomatoes.

Other celebrities also spoke out about the show's cancellation in the comments section of Kravitz's post.

"I rarely find shows that genuinely impress me. This one did," Lena Waithe wrote. "I told you how much I loved this show. And I still do. This one definitely deserved another season."

Questlove stated, "WHHHHHAAAAAAAAAAAATTTTTTT!!!?????????!!!!!!!!!!!??? Why do I always find out about tragic s--- this way?!" while musician Moses Sumney said, "Y’all wrote the hell out of it. I’m sad to not discover what happens next! But grateful for all the melancholic joy it gave."

Kravitz, who also executive produced the series, wrote, "I wanna give a shout out to my #highfidelity family," in the aforementioned Instagram post. "Thank you for all the love and heart you put into this show. i'm in awe of all of you. and thank you to everyone who watched, loved and supported us. ✌🏽 #breakupssuck."

The Hulu series was especially sentimental to Kravitz, whose mother, Lisa Bonet, appeared in the movie version.

"I've always been a fan of the book and the film regardless of the fact that she was in it," Kravitz told E! News earlier this year. "But I think it's a cool thing that she was a part of it. And it feels like a very cool, serendipitous, full-circle situation for sure." 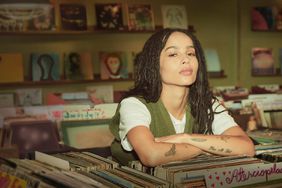