Houston's vocals in the film were actually recorded by Deborah Cox

Lifetime’s new Angela Bassett-directed Whitney Houston biopic Whitney is slated for a January debut, and clips from the film are already beginning to show.

Though Houston is played in the film by Yaya DaCosta, her vocals were actually sung by Deborah Cox, who will be heard singing “The Greatest Love of All,” “I’m Your Baby Tonight,” “I’m Every Woman,” and “I Will Always Love You.”

The film focuses on the relationship between Houston and Bobby Brown, which even during the best of times could be described as “tumultuous.”

Following the film’s premiere, Lifetime will air an hour-long documentary titled Beyond the Headlines: Whitney Houston. It will draw from interviews with friends, peers and other members of the music industry. 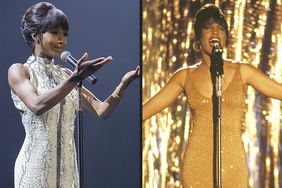