The original Captain Kirk has been thriving in Hollywood for over seven decades, and recently made history as the oldest person to go to space

Born on March 22, 1931 in Montreal, Quebec, Canada, William Shatner grew to fame as a television star, most famously as the original Captain James T. Kirk in the Star Trek franchise, and expanded his repertoire into film, books and video games.

Shatner landed the role of Captain James T. Kirk in the original Star Trek series in 1966, which ran until 1969. The show, which also starred Leonard Nimoy, DeForest Kelley, Nichelle Nichols, James Doohan and George Takei, went on to become the most successful TV sci-fi franchise ever and spawned a loyal fan base who call themselves Trekkies.

The actor went on to voice Kirk in 1973's Star Trek: The Animated Series, and starred in the 1979 motion picture.

Years later, he got back in the saddle as Kirk in the next two film installments of Star Trek: The Wrath of Khan (1982) and The Search for Spock (1984).

In addition to acting, Shatner has a passion for music. He released his album Bill in September 2021; it includes appearances from music stars Joe Jonas, Brad Paisley and Joe Walsh.

In 2019, the star was inducted into the Order of Canada — the second-highest merit honor in the country — in recognition of his decades-long acting career and philanthropic efforts.

He's also authored several books, including a memoir called William Shatner: Live Long and ... What I learned Along the Way, Leonard, a look into Shatner and Star Trek costar and late friend Leonard Nimoy's friendship, and The TekWar Series, which was later adapted into comics.

Off-screen, Shatner has been married four times, most recently to Elizabeth (right), whom he divorced in 2020, and has three adult daughters, Leslie, Lisabeth and Melanie.

On Oct. 13, 2021, the real-life Captain Kirk made history as the oldest person to travel to space at 90 years old. Shatner was one of four crew members who completed the 11-minute journey on the New Shepard rocket for the NS-18 mission, thanks to Jeff Bezos' aerospace company Blue Origin.

"It's life-changing in its way, not because of the aerial adventure, but because of the people I'm meeting," Shatner said in a video that aired during Blue Origin's livestream about fellow space travelers Audrey Powers, Chris Boshuizen and Glen de Vries.

Upon landing, Shatner and his crew were met with applause and a hug from Jeff Bezos.

"In a way, it's indescribable," the actor told Bezos, who made his own trip to space back in July.

"Not only is it different from what you thought, it happens so quickly," he added during Blue Origin's livestream.

The star got emotional, sharing his wish for all humans to experience the wonders of space travel. 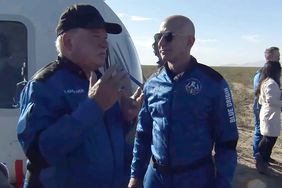 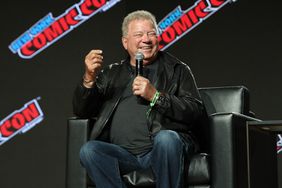 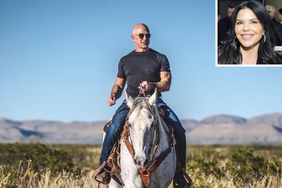 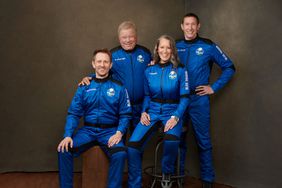 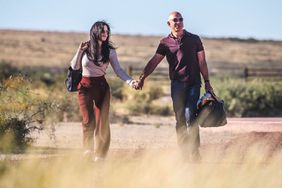 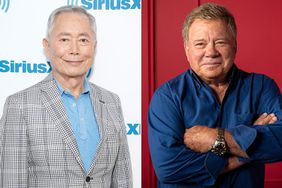 George Takei Says William Shatner Is 'Not the Fittest Specimen' for Space Travel: 'A Guinea Pig' 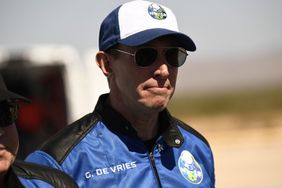