Butt of the Joke? William Shatner Comes Face to Cheek with a Naked Man on 'Better Late Than Never'

Maybe things just got a little lost in translation?

The Capsule Hotel features somewhat morgue-like drawers intended to for sleep – but it’s tough for most of the men to do so behind a see-through door.

“It looks like a kennel,” groans Shatner, 85, before Foreman, 67, falls while climbing the ladder to his room.

Dye, however, is feeling the space: “It’s Tokyo, it’s different here,” he says. “It’s not like at home in your mansion.”

Just as the stars are settling in, things get even weirder when a naked man marches down the hallway, before mounting a ladder with his bare bum in Shatner’s face.

Premiering Aug. 23 on NBC, Better Late Than Never follows Shatner, Foreman, 70-year-old Winkler and 67-year-old Bradshaw as Dye leads them around Asia for a month with no set schedule or plans. 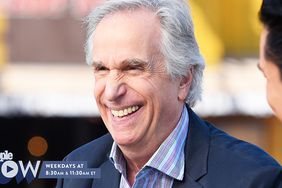