Why Is 'This Is Us' ' William Feeling So Energetic After Quitting Chemo?

In an exclusive sneak peek at Tuesday's This Is Us, William (Ron Cephas Jones) is on a little bit of a high after stopping his chemotherapy treatments

It’s a new dawn. It’s a new day. And he’s feeling good — but is it just a burst of false hope?

In an exclusive sneak peek at Tuesday’s This Is Us, William (Ron Cephas Jones) is on a little bit of a high after stopping his chemotherapy treatments — an emotional decision he made in the midseason return.

After Randall gripes about hump day, chipper William retorts, “Wednesday’s the meat in the Tuesday-Thursday sandwich. And what a sweet, sweet meat sandwich it is.”

Prodded by the couple if he’s feeling okay, William assures, “Okay does not do justice to how I feel. I feel better than I’ve felt in months. I feel like sex. I feel like magic. I feel like music.”

After William heads off to curate a music list for his borrowed iPod, Beth speculates about her father-in-law’s renewed energy.

“Chemo boosts,” she tells Randall. “Happened to my dad when he stopped his treatment. His energy’s not being zapped anymore.”

RELATED VIDEO: Sterling K. Brown’s Wife Shares Sweet Memory of Sneaking into One of His Auditions

Just last week, This Is Us was renewed for two more seasons by NBC. Each season will feature 18 episodes. 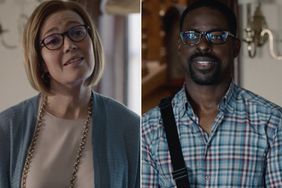 'This Is Us' Sneak Peek: Rebecca Asks to Hear About Randall's New Orleans Trip Before Kevin's Wedding