After two months of stunning twists and confusing turns, the investigation into Jussie Smollett’s alleged hate crime is all but over.

On Tuesday, prosecutors dropped charges against the Empire star stemming from his indictment on 16 counts of disorderly conduct for allegedly staging an attack against himself in January. (The black and openly gay actor claimed that two masked men had hurled racist and homophobic insults, doused him with a chemical, and slipped a rope around his neck; however two brothers later claimed he’d paid them to do so.)

“I would not be my mother’s son if I was capable of doing what I was accused of,” Smollett, 36, told the press.

But will he be back on TV? Although the network called rumors that the actor would be written off Empire “patently ridiculous” in mid-February, when he turned himself in to police a week later, his character Jamal Lyon was removed from the final two episodes of season 5 “to avoid further disruption on set.”

Following the news that he’d been cleared, FOX Entertainment and 20th Century FOX Television, which jointly produce Empire, issued a statement: “Jussie Smollett has always maintained his innocence and we are gratified that all charges against him have been dismissed.” And a verified account for the musical drama’s writers tweeted, “See y’all Wednesday,” alongside a winky face emoji and screenshot of Smollett on CNN.

Still, any discussions of Smollett’s return or dismissal from the series are premature. Empire is up for renewal, so every actor is awaiting word of a season 6. As usual, if another season is green-lit, the executive producers would map out the story arc and decide who to ask back. Public opinion could influence the network’s decision, too; though the charges have been dropped, he has not actually been found innocent.

“Exoneration means there was a finding of factual innocence and usually that’s done after a hearing in front of a judge with the victims and the witnesses,” criminal defense attorney Alaleh Kamran, who is not associated with the case, told PEOPLE. “There’s testimony, and then the judge makes a finding that this person was innocent and should not have been arrested — that’s what exoneration means.”

Empire Star Jussie Smollett Has Been Cleared: Everything We Know About His Alleged Hate Crime

“I think what happened is the prosecutor could not prove its case and they decided to cut their losses short right now before going any further and getting egg on their faces,” she added.

Kamran pointed out that while Chicago state prosecutors are not pursuing the case further, there is still an FBI investigation pending regarding the threatening letter Smollett allegedly received on the set of Empire.

It’s worth noting, of course, that the cast and crew have at least tacitly supported Smollett throughout the ordeal, avoiding condemning him even as the investigation shifted to indicate an alleged hoax.

Jussie Smollett Likely Wouldn’t Have Gone to Prison Even if Found Guilty at Trial: Prosecutor

“You have to stay strong, stay positive, full of hope,” Taraji P. Henson told Extra days before Smollett was cleared.

In an interview with Entertainment Weekly, showrunner Brett Mahoney admitted the scandal has been an “emotional roller coaster” for the cast and crew. 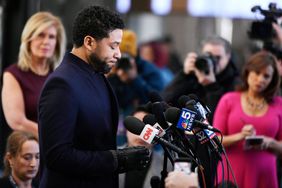