Sorry Will & Grace fans, but Grace and Noah are officially over.

Debra Messing confirmed that David Schwimmer is not returning for the next season of the hit NBC sitcom.

“He is not, sadly,” Messing told reporters at Chanel’s 14th annual Tribeca Film Festival artists dinner when asked about Schwimmer’s fate on the show.

“I love David and I had a ball with him so hopefully there will be another opportunity for us to play together,” she added.

On Monday, Chanel hosted the annual celebration of the 2019 Tribeca Film Festival Artists Program at Balthazar in New York City. The evening honored the artists who have contributed original artwork to the festival’s award-winning filmmakers.

Schwimmer joined the cast of Will & Grace as Noah, a single father famous for his Twitter personality “the West Side Curmudgeon.” After running into Grace, the two begin a relationship.

And while fans loved Noah’s oftentimes drab attitude against Grace’s quirkiness, season 2 of the reboot ended with the couple going their separate ways — read: Grace got on a plane to Europe moments after meeting Marcus (Veep‘s Reid Scott) at the airport — shortly after moving in together.

Will & Grace Cast Reveal Their Pre-Show Ritual — And It Includes Some NSFW Dance Moves!

“He is the spine of Grace’s season,” Mutchnick told The Hollywood Reporter ahead of season 2. “He’s the story that we are telling for the character of Grace Adler and he will impact on her character after he’s gone.”

It was clear Schwimmer was a fan-favorite from the start.

“On the episode that aired, we actually are not playing the track of the reaction that took place the night of the show, because that actual reaction is too loud and too long,” Mutchnick said of the actor’s original reveal.

“He came out and when people first saw him coming in, they went bananas,” added Kohan.The original Will & Grace ran on NBC from 1998 to 2006. The reboot was recently renewed for a season 3 (the show’s 11th total). 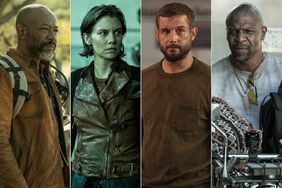