The actor got married on Sunday

Congratulations are in order for Will Friedle: He’s a married man!

The Boy Meets World star took to Twitter this weekend to announce he had tied the knot on Sunday.

“Ladies and gentleman…Mrs. Squirrels…” he captioned a picture of himself and his wife for the first time, though he didn’t disclose her identity or any further details about their relationship.

Friedle, 40, also shared a picture of himself on his wedding day, writing: “I’m sorry you weren’t all invited to the wedding. #RandomSundayApology #BoyMeetsWife.”

The actor first revealed he was going to be getting hitched earlier in the week.

“Flying home for my wedding today…yup…sounds weird even when I type it! #CantWait,” he shared Tuesday on Twitter, before clarifying the timeline: “I appreciate all of the love but I get married this Sunday…still…all of your shout outs have made us so happy! #YoureTheBest.”

The star most recently reprised the role of Eric for the TV sequel, Girl Meets World. 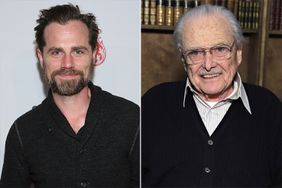