Why Kermit Chose to Be 'The' 'Masked Singer' 's Snail: 'We're Both Menu Items at French Restaurants'

It's not easy being the first contestant kicked off of The Masked Singer. But Kermit the Frog took it in stride when he received the least number of votes during Wednesday's season 5 premiere and took off his Snail costume.

"I did hope to last longer on the show, but it just wasn't meant to be," Kermit told PEOPLE via email.

Snail's clue package featured a teddy bear and a late-night TV set, and a hint that the shelled gastropod directed, produced and recorded albums and "even graced the Oscar stage." So after Kermit performed Hall & Oates classic "You Make My Dreams (Come True)," judges Ken Jeong, Jenny McCarthy, Nicole Scherzinger and Robin Thicke suspected the star underneath the Snail costume could be someone with hosting credentials, like Adam Carolla, Billy Crystal, Jimmy Kimmel, Jay Leno and Seth MacFarlane.

When the Men in Black removed Snail's head, the panelists and guest host Niecy Nash didn't understand why they didn't see anyone underneath — until Kermit popped out.

Jeong, 51, called Kermit "the most famous guest on The Masked Singer ever" and Thicke, 44, agreed.

"It's really been a pleasure," Kermit said of his time on the show after being unmasked. "Thanks for having me!"

Below, Kermit reveals how it felt being inside the Snail outfit, what Miss Piggy thought about him being in the spotlight, and what the COVID-19 pandemic has been like for a frog.

Why did you want to go on The Masked Singer?
I've been in show business for quite a while, so I'm always looking to take on a new challenge and try something different. And let's face it, when it comes to challenging and different, you can't beat putting on a snail suit and singing on national television.

Were you disappointed to be the first contestant eliminated on season 5?
Oh, I was disappointed. However, I did set the record for "longest-lasting celebrity frog in a snail costume" in the entire history of Masked Singer. So, I'll always have that.

How did you keep your identity hidden from the behind-the-scenes folks on the show? Your green limbs are a bit of a giveaway.
That was easy. I just stayed inside the snail the whole time. The shell was a built-in mobile home, with all the amenities — kitchen, bedroom, en suite, home theater with surround sound. Even when the show was over, I didn't want to come out.

Why did you pick the Snail costume? Were you ever tempted to eat the costume since some frogs eat snails?
I picked a snail because snails and frogs have a lot in common; we're both menu items at French restaurants. As for eating the costume, I wasn't tempted. The only Muppet who eats his wardrobe is Animal.

Is Miss Piggy jealous that you were picked to go on the show? Did she know you were under the Snail costume?
Miss Piggy did not guess I was the Snail. Snails eat geraniums, and she knows I'm allergic, so that threw her off the trail. And surprisingly, she was not jealous of my being on the show. Piggy loves the spotlight. If she's going on TV, she's not going to hide behind a mask; she wants everyone to know it's her the first fabulous minute she steps on stage.

What other songs would you have liked to sing if you made it further in the competition and why? What was the significance of the song you performed, "You Make My Dreams (Come True)"?
I had hoped to do Taylor Swift's "Shake It Off." It's a fun song, and it always reminds me of when I was a tadpole trying to drop my tail. As for "You Make My Dreams (Come True)," I love songs about dreams and making them come true. In fact, I wanted to do "Rainbow Connection," but the producers thought that might be too big a clue. They were probably right about that.

What did you think of being guessed as Adam Sandler, Seth MacFarlane and Billy Crystal? Do you think you're a better singer than those guys?
That was great. Adam, Seth and Billy are such comedy icons, it was an honor to be mistaken for them. As for their singing, those guys are all good singers, too. I mean, who doesn't love Adam Sandler's "Hanukkah Song" or Bill Murray lounge singing the Star Wars theme? Hey, maybe we could get together and form a supergroup?

Besides doing The Masked Singer, how else have you been entertaining yourself during the pandemic?
Work-wise, we've been busy, bringing the original Muppet Show to Disney+, and working behind the scenes on all kinds of strange new productions. As for my personal life, I've been spending a lot of time sitting on a log playing banjo in the middle of the swamp. It's pretty easy to follow social distancing guidelines when you're surrounded by alligators. 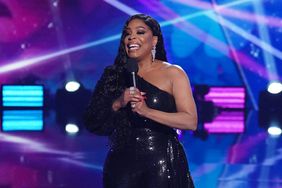