"This is what we call responsible social distancing," Whoopi Goldberg said on Wednesday's episode of The View

Whoopi Goldberg is joining the growing list of television personalities working from home amid the coronavirus crisis.

The EGOT winner moderated Tuesday’s episode of The View via video feed from her home in New Jersey, telling co-hosts Sunny Hostin and Meghan McCain and guest co-hosts Sara Haines and Dan Abrams that she was staying away from their studio in midtown Manhattan out of an abundance of caution.

“This is what we call responsible social distancing,” Goldberg said at the top of the show, assuring the viewing audience that she was feeling “great.”

Goldberg had missed Tuesday’s episode of The View to meet with a doctor and make sure she was well enough to keep working. The 64-year-old star nearly died last year after coming down with pneumonia and sepsis, conditions that left her hospitalized for weeks.

Though she said was given the “all clear” to go to work from her doctor, Goldberg decided to stay away, citing “inconsistent messages” from New York City Mayor Bill de Blasio and New York Gov. Andrew M. Cuomo.

“[You have] mayor who’s saying, ‘We’re going to be in place for now, New York’s going to get locked down’ and then you have Gov. Cuomo said, ‘Well, that’s not going to happen,’ ” Goldberg said. “I just felt like, if I was going to really try to figure out whether it was okay to come in, my brain said, ‘You know what, until they can get themselves together — the governor and the mayor — until they can figure out what they’re doing, I should not go in.’ So that’s why I am still here.”

“I am healthy,” Goldberg added. “My doctor was very annoyed with me. He said, ‘I just gave you the okay, why are you back?’ I said, ‘Because I need an okay okay.’ So he gave me the okay okay, but I just felt like, with all the inconsistency between the governor and the mayor, it wasn’t good for me.”

Joy Behar, 77, Taking Time Off from The View Over Coronavirus Concerns: ‘I’m in a Higher Risk Group’

Goldberg’s decision comes nearly a week after View cohost Joy Behar announced she would be taking a break from the ABC talk show.

“I’m gonna stay home for a while,” Behar, 77, said last week on the show, which has scrapped its live in-studio audience during the outbreak. “I’m going to socially distance myself a little bit. So next week you won’t see me here. I don’t know how it’s going to go, but that’s what I’m thinking.”

She went on to explain that she didn’t have any COVID-19 symptoms but was making the precautionary move at the urging of her daughter.

“I’m in a higher-risk group because of my age, but I’m perfectly healthy,” Behar said. “I’m doing this myself. Luckily I don’t have to worry about childcare and things like that and also, I have enough money to take off some time.”

“Believe me, the staff here, the exec producers, everybody, has really been doing their due diligence to clean the place up,” she added. “But I’ve been thinking, maybe at my age — I know I look good, I look fantastic — I don’t look my age, I don’t. And so you really can’t tell how old I am by looking at me, but I am up there. The number, it makes me dizzy!”

The View Cuts Studio Audience Due to Coronavirus Concerns: ‘This Is Unprecedented’
Meghan McCain Criticizes Donald Trump for ‘Misinformation’ Amid Coronavirus Outbreak

The View is one of the last remaining shows on daytime continuing to put out new episodes. Many other programs, like The Wendy Williams Show, The Kelly Clarkson Show, The Tamron Hall Show, and Live with Kelly and Ryan, have paused production.

Meanwhile, Goldberg isn’t the only TV star working from home.

Savannah Guthrie anchored Wednesday’s episode of the Today show from her basement, after coming down with a mild sore throat and runny nose.

“Well now we’re really social distancing aren’t we Hoda?” Guthrie joked to co-host Hoda Kotb. “It’s very unusual. … I wouldn’t have thought anything of it, but we are in different times aren’t we?”

Al Roker also did the weather report from his home, after a 3rd Hour of Today staffer tested positive for COVID-19.s 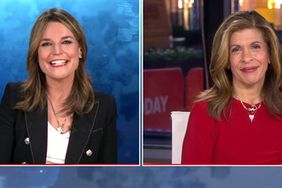