The split came almost a month after the Wendy Williams Show host revealed to fans that she had been staying in a sober living house.

Shortly after, Hunter gave an update on his 54-year-old wife, telling Entertainment Tonight that Williams was “doing well.”

“We’re doing well as a family,” Hunter, 46, said in the interview. “We are moving forward with working on her sobriety and doing the work to help others, not just ourselves.”

So who is Kevin Hunter?

Williams and Hunter (who was reportedly born in Ontario, Canada) met at a skating rink in 1994 and married three years later. The pair later welcomed their son, Kevin Jr., in 2000.

Despite having no previous television experience, Hunter, who owned a beauty parlor before meeting Williams, became her manager and production partner, helping her launch the Wendy Williams Show.

While Williams and Hunter have a relationship spanning nearly three decades, their marriage hasn’t been perfect. The couple have weathered scandals since the start.

Hunter has long been accused of being unfaithful to Williams. Shortly after she gave birth to their son, Williams admitted she caught Hunter cheating when she overheard a late night phone call with his mistress.

“I had already had the baby,” she told VLAD TV in 2013. “When you deliver a baby the mother doesn’t get much sleep anyways. Little Kev might have been one month old…and I wasn’t back to work yet.”

She continued: “I overheard some greasy talk from the next room. Well who is he talking to? I tipped and I crept and I heard what I heard. I was like ‘Wow okay, so this is how it’s going down.’ ”

Williams said she eventually decided to forgive Hunter and that the experience made their relationship “stronger.”

“I love him and he loves me and we decided to address this head on,” she said. “I don’t regret [deciding to stay with him.]”

In 2008, Nicole Spence, a former employee of Williams’ radio show, The Wendy Williams Experience, made allegations of abusive behavior by Hunter in a June 2008 lawsuit against him and Williams. The complaint claimed Hunter sexually harassed Spence and created a “hostile work environment,” and alleged that Spence witnessed Hunter physically assault his wife.

“In one instance,” alleged the complaint, “Mr. Hunter stormed into the studio, demanded that other employees leave and openly physically abused Ms. Williams, pinning her against the wall with his hand around her neck, choking her while repeatedly pounding his fist into the wall directly by her head.” The case apparently was settled on Oct. 22, 2008.

And while it has long been rumored that Hunter has had a decade-long affair with a massage therapist, Williams brushed off rumors in September 2017.

She also has previously hit back at reports that the massage therapist was pregnant with Kevin’s baby. In January, her lawyer sent blogger Love B Scott a cease-and-desist letter.

“Mrs Wendy Williams-Hunter and Mr Kevin Hunter categorically deny each and every allegation made by your ‘sources,’ ” stated the letter.

Williams once again defended her marriage after revealing she’d been living in a sober house to help deal with addiction struggles.

“I want to shout-out to my husband. I’m still wearing my ring,” she said during a March 4 episode of her show.

But on Thursday, she hosted her show without wearing her wedding ring. And shortly after, PEOPLE confirmed their divorce. 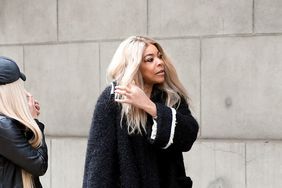