With her wedding to former The City producer Tim Rosenman swiftly approaching, Whitney Port is dishing on her second(!) bachelorette party, which featured sunny skies and the sweet support of her nearest and dearest.

The Hills alum took eight people on the five-day trip to Cabo San Lucas, including two sisters-in-laws, three sisters, a cousin and her best friend.

"I had two bachelorette parties," Port tells PEOPLE. "I wanted it to be in two different locations, and I have two different sets of friends and family that I wanted to spend my time with."

"The first one was Vegas, and the second one we went to was the most amazing new hotel in Cabo San Lucas, called The Cape. It's a Thompson hotel. It was like a whole new world for me. It's such an awesome hotel," gushes Port.

"We stayed at the hotel the whole time," Port says. "It's one of those hotels where you can just have everything. They have a beautiful infinity pool and the best margaritas and drinks and they have this amazing rooftop."

"It was totally luxury on the beach which is what I wanted for my second bachelorette," Port says.

"The first bachelorette, you can't really go to Vegas and not go all out, even though I'm 30 now and one night is kind of enough for me! That one was way more about partying and this one was about real quality time, drinks by the pool and relaxing and talking."

"My soon-to-be sisters-in-law didn't really know my sisters, so it was great to have quality time in a really cool place."

"My sister put together these amazing welcome bags," says Port. "It was like a mini wedding! She got cute pajamas, sweatshirts, all my favorite beauty products, bathing suits, she went all out!

"Everyone got a bag with their name on it from this place called Ban.do," she adds. "They make updated modern sophisticated party supplies so they made those bags for us. They were personalized. Everyone felt like it was Christmas!"

Though he'll be at the center of their upcoming festivities, Port's fiancé – who popped the question in 2013 with a rose-gold, oval-cut diamond stunner by jeweler Ron Bensimon – didn't make the trip to Mexico with his Mikoh-bikini-rocking bride-to-be after he had his bachelor party in the Hamptons last year.

One of Port's favorite parts of the trip didn't even make an appearance until it was almost over! "My sister forgot to give me that until the last day!" she says of this adorable pre-wedding headpiece. "It was so cute. I would have worn it the whole time! It was a little veil and a headband."

As the big day approaches, "I feel great! I'm really not nervous at all," says Port, who didn't let wedding prep stress her out. "I've been a very particular bride, not in the sense of being a Bridezilla but in the sense of knowing how I want things to go. I feel pretty organized. My older sister is a wedding planner so I feel really lucky."

"I'm on the home stretch," she says. "I'm just looking forward to Tim being my person, not that he isn't already. But it just makes it so much better and more fun and easier just to know that you have this unconditional support. It's such different support than you have from your family."

"I'm so excited to embark on this journey with Tim," says Port. "It's a really exciting time." 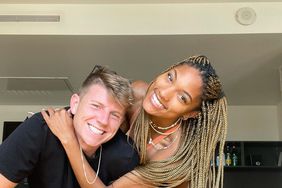