Whitney Port was the girl who went to Paris on The Hills — and she’ll be back for MTV’s highly anticipated reboot.

Port, 33, starred on the L.A.-based reality show from 2006-08 before jetting off to New York City for her own spinoff, The City. The Hills: New Beginnings will reunite original cast members, alongside their children, friends and returning favorites. Although the original series followed Lauren Conrad as she tried to make a name for herself in the fashion world, and later Kristin Cavallari, who took over as the lead for the final season, neither will be returning for the reboot.

Now a designer herself, Port says she was disappointed that her Teen Vogue intern pal Conrad isn’t coming back.

“Of course, it would be ideal if the whole cast could get together, I feel like that’s what everybody would want to see, and she was the main person on The Hills, so it would’ve been awesome. But I understand some people just want more privacy at this point,” she tells PEOPLE. “We’re older now and we have a lot more to protect. So I don’t begrudge her, I’m not upset for making the decision she made.”

Port welcomed baby boy Sonny in July 2017, and she said motherhood has inspired what projects she chooses to take on — which is why she’s thrilled to be working on the Mrs. Meyer’s Compassion Flower Project, “an initiative to teach kids how empathy can be nurtured and grown both inside and outside of school,” according to the company.

For every bottle of Compassion Flower-scented hand soap sold, Mrs. Meyer’s is giving a Growing Compassion Gardening Kit to a classroom, benefitting up to 30,000 students in the United States.

“It’s just a really sweet message,” Port says. “Growing, plants, teaching little kids how to nurture and care and show compassion for something. So, for me, with a new little one, though he’s not in kindergarten yet, I would love if he were to be in a classroom for him to do something like this and thought it was a really special message to share.”

RELATED LINK: The Hills Is Coming Back to TV! So, Which O.G. Cast Members Will Be Returning?

And her 13-month-old son will be on The Hills: New Beginnings.

“Being a mom is a huge part of my identity now, so it would feel weird if he was never on it and I just talked about him,” she explained, adding that she’s working on convincing her husband, producer Tim Rosenman.

“He doesn’t really want to do it,” she says. “He’s in TV, he works behind the camera, so it’s not really natural for him to be on it. But also, he is my husband, and the show is based on our real lives, so it would be weird if it were just me and nobody else. So I think he’ll pop up here and there.”

RELATED VIDEOS: MTV Announces The Hills Reboot at the 2018 VMAs

Though she’s unclear what direction the new series will take, Port says she’s excited to get to know the rest of the cast since, as Conrad’s colleague, she primarily filmed apart from their social circle.

“I’m excited to actually, maybe this time around, get to know them more and actually reunite with them and meet their babies, and our babies can be friends and stuff,” she says.

And she hopes New Beginnings won’t include as much scripted drama as The Hills.

“I think it will be more of like a slice of life. I don’t think — nobody really has the patience or the time for that kind of thing anymore,” she says. “I wouldn’t want to necessarily be a part of something that was like that.” 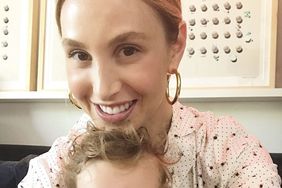 Whitney Port Says Her Son Will Likely Be on 'The Hills' Reboot: 'It Would Feel Weird' Without Him