Whitney Port is getting candid about one of her “bigger regrets in life” — and it involves Leonardo DiCaprio.

During a recent episode of her With Whit podcast, The Hills: New Beginnings star, 34, said that she once turned down a “one-night stand” with the actor. Port recorded the episode alongside her best friend Andrea Cuttler, who was there during the alleged incident.

“I have been dying to tell people this story for ages!” Port said on the podcast. “I feel like whenever I tell it to friends, no one believes me.”

Cuttler then explained that the two allegedly met DiCaprio during a night out in New York City in 2009. Port and the 44-year-old actor swapped phone numbers, Cuttler said, and the two talked in a corner for much of the night.

Port said she and DiCaprio kept texting on BlackBerry Messenger for six months, and she eventually saw him again.

“I saw him one more time,” the reality star explained. “I saw him at the Roosevelt Hotel. He invited me out to Teddy’s and he invited me back over to his house, and I said no.”

“I was too nervous,” Port continued. “I had never had a one-night stand. I didn’t want to be with him alone. … I was way too nervous to do it and then I lost my chance and it’s really one of my bigger regrets in life.”

“He never spoke to me again,” Port joked as she concluded the story.

Later, at a live podcast taping with her Hills costar Kaitlynn Carter at The Grove in Los Angeles on Thursday, an audience member asked Port how she felt about finally sharing the story.

“It’s funny how you have a podcast and you know that, like, anybody anywhere can listen to it, but you forget people actually do,” Port responded. “So when I was talking — especially when I’m podcasting with my best friend — I’m so comfortable with her.”

Whitney Port Says She ‘Never Thought’ She’d Return to The Hills Married — with a Son!

The Hills star said that her sister told her she had seen the story about DiCaprio “on some news feed” after the podcast aired this week.

“I don’t know that he’ll ever see it. Do you think he’ll see it?” she asked the audience. “I don’t think he will. You guys won’t tell him, right?” 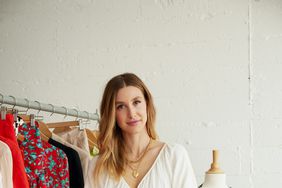