Hold on to your sequins, Dancing with the Stars fans: two-time mirror ball trophy winner Cheryl Burke is quick-stepping over to a new network!

PEOPLE has learned exclusively that Burke, whose contract just expired on the ABC show, will star in a new project for NBC in 2015.

Burke, 30, will be one of several stars on a new variety show. The network isn’t ready to reveal the title now, but insiders promise the show will have a competitive element and that Burke will perform.

“I never thought I’d be able to walk away,” Burke told PEOPLE. “But after a decade of something, it’s time for me to move on and try something different, to be challenged, to feel inspired. Dancing with the Stars will always be a part of my life. Dancing is what I’ve done since I was a little girl. But it was very clear the show only wanted me back as a dancer. They weren’t interested in using me for other things and letting me grow.”

“Instead of teaching people how to dance, I need to be taught something,” Burke continued. “I need to feed my brain with other knowledge. This was a perfect opportunity. My contract was very restrictive on Dancing with the Stars so I couldn’t do anything else. I’ve been waiting to add to my résumé now for years.”

And hanging up her Capezios for a judging spot alongside former DWTS hoofer Julianne Hough wasn’t an attractive option for Burke.

“I would rather judge in America’s Got Talent than Dancing with the Stars,” she explained. “They are my friends. I’m blunt and very honest. We all take it personally. It would be very hard for me to judge my friends.”

Burke’s last appearance on DWTS – which she joined in the second season – was Nov. 25. Some viewers managed to capture and Tweet photos of her crying in the opening number.

“I was bawling, knowing the opening number would be my last number,” Burke recalled. “I’m still not over it. It will be really hard for me to watch the new contestants next year, but I’ll be cheering everybody on. I hope they do the same for me.”

Looking back, Burke relishes the friendships she cultivated with ex-partners like Rob Kardashian, Emmitt Smith, Jack Osbourne and Drew Lachey. Naturally, she regrets contributing to Cristién De La Fuente’s injured tendon – but she got a fun trip out of it.

“He was this close to bowing out, but he said if we make the finale, he’ll take me and five friends to Chile. We made the finale. We went to Chile!”

And now that it’s all over, Burke isn’t walking away empty-handed. Besides earning the sparkly hardware from Seasons 2 and 3, she left with her final costume – and the knowledge that she helped a lot of people.

“Changing someone’s life was the highlight,” she says. “It’s not so much about winning the trophy. It’s about changing someone’s life, like helping them to lose weight, to gain more confidence, or helping them to believe in themselves. Every person I have danced with had a great experience, and that’s something they will remember forever. I’m so honored to be a part of that.”

Len Goodman to Leave Dancing with the Stars
Related Articles 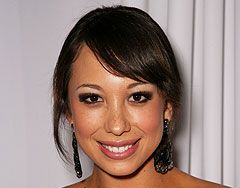