Victoria Beckham to Square Off with 'SpongeBob'

The fashionista will play Queen Amphitrite, goddess of the sea, on a show in 2010

Victoria Beckham is going deep for her next TV role.

The former Spice Girl and current fashionista, who’s already appeared on ABC’s Ugly Betty, is lending her voice to a character on Nickelodeon’s hit cartoon SpongeBob Square Pants, a rep for the show confirms to PEOPLE.

Beckham, 34, will play Queen Amphitrite, goddess of the sea, in a half-hour episode called “Neptune’s Party,” scheduled to air in summer 2010.

In the meantime, SpongeBob and the rest of his pals are celebrating the show’s 10th anniversary with a special half-hour SpongeBob vs. the Big One starring Johnny Depp. The Pirates of the Caribbean star will voice the part of super surfer Jack Kahuna Laguna in the episode airing April 17 (8 p.m. ET) on Nickelodeon.
– Aaron Parsley 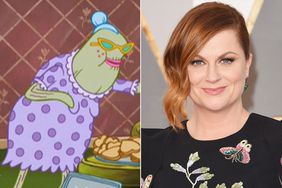 'SpongeBob SquarePants:' 19 Celebrities You Might Not Have Known Voiced Characters on the Show' '