• Tyra Banks is working on a new reality show, about a search for an assistant at a fashion magazine. They considered hiring Lauren Conrad, but then remembered that The Hills isn’t real.

• GSN is launching Bingo America, an interactive game show hosted by Dallas‘s Patrick Duffy. Too bad it’s all a dream.

• Try not to faint! Marie Osmond is set to host a daytime talk show.

• Not interested in the Tom Petty halftime at the Super Bowl? Animal Planet will again air the Puppy Bowl, complete with a kitten halftime show. Or as the kittens would say, “Meow meow meow. Purr.” Roger Wong/INF 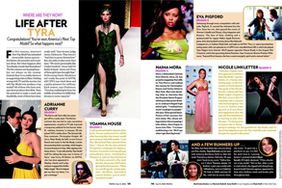