Kourtney Kardashian and Travis Barker have found their happiness and aren't letting go!

The Blink-182 drummer, 45, shared photos on his Instagram Monday of himself with the Keeping Up with the Kardashians star, 42, as they held hands and ran down the hallways of the Wynn in Las Vegas.

Sharing some blurry pictures of their night out, Barker captioned the series of images simply with two devil emojis.

For the night on the town, the musician wore a white tank with a leather jacket and accessorized the look with a black beanie and a metallic skull necklace around his neck.

The Poosh meanwhile founder opted for a silver metal mesh halter top with a cowl neckline and a black mini skirt.

They both had beaming smiles while going through the hallways of the hotel.

Barker also posted a photo with Kardashian's legs on his lap as he held onto one of her feet as they attended the opening weekend of Delilah Las Vegas.

While in Sin City, the pair also attended the UFC 264 fight. Kardashian also shared some blurry photos of their fight night date on Saturday.

"What happens in Vegas," Kardashian captioned photos showing her beau whispering in her ear and making her laugh the night of the UFC event.

During the fight, the couple packed on the PDA for everyone to see.

When a camera panned to Kardashian and Barker enjoying the night's festivities from their seats, the couple gazed into each other's eyes before they made out for viewers in attendance and those watching from home.

Since then, the couple has been proudly showing off their love. From Barker tattooing Kardashian's first name on his chest to the pair packing on the PDA during a romantic trip to Utah, the two are very open about how they feel towards one another.

Barker has also gotten the seal of approval from the Poosh founder's family, a source previously told PEOPLE.

Last month, her mother, Kris Jenner, raved about the couple's relationship. "Isn't it great?" Jenner, 65, mused during an appearance on On-Air With Ryan Seacrest. "I know, it's the best." 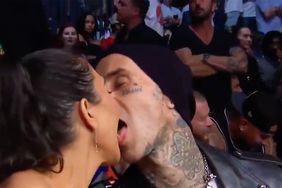 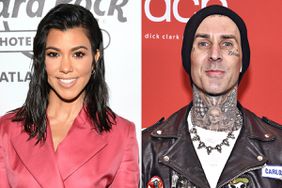 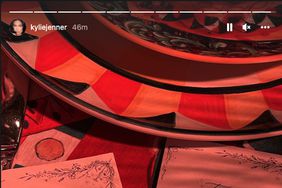