Tracee Ellis Ross on How She 'Really' Uses Her Golden Globe Award: 'I Have Pounded Chicken with It'

Tracee Ellis Ross made history at the 2017 Golden Globes when she became the first African-American woman to win the award for best actress in a TV series, comedy or musical since 1983 — a career milestone she is finally able to celebrate with “a bunch of people I love” following a busy award season.

And when it comes to her trophy, the Black-ish star refuses to let her first-ever Golden Globe collect dust, instead opting to incorporate it into her day-to-day life.

“It is very functional, the award,” Ross, who recently launched MOTRIN’s #WomanInProgress campaign, tells PEOPLE, jokingly adding: “I have pounded chicken with it. I did some tenderizing.”

But that’s not all the award can be used for, according to the actress.

“It’s also a wonderful paperweight,” she said. “You can probably hold down more than paper. It’s a great book holder too. I need another one for the other side of the books, though.”

It’s been a little more than a month since Ross made her way to the Golden Globes stage to deliver her passionate acceptance speech, but the star has already racked up quite the adorable story about her recent accolade — involving her on-screen son, played by Miles Brown.

“That first day was actually really fun because I brought [the award] with me everywhere and then Miles [Brown] hadn’t seen it yet because we didn’t have any scenes together, and I was, like, ‘Well, go get it from my dressing room.’ And he’s like, ‘I can go get it?’ And I said, ‘Yeah, you can go get it, but don’t drop it.’ And apparently from my dressing room to getting to stage, he had like many a photoshoot. Because I’ve seen many different photos of him with [the award].”

If Miles’s cute Twitter freakout over his TV mom’s historic win and above selfie are any indication, the rest of the pint-sized actor’s mini photoshoot was probably just as aww-inducing. 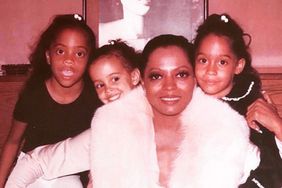 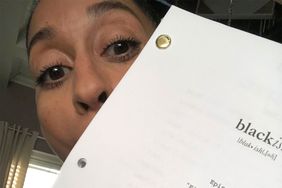