Since Chrisley Knows Best premiered in 2014, the Chrisleys have opened up their home to the world — through the good and the bad.

In fact, the head of the family and self-made multimillionaire Todd, 47, prides himself on the genuine ups and downs that unfold on the reality show, which chronicles his life with his wife Julie, 44, their children — Lindsie, 27, Chase, 20, Savannah, 19, Grayson, 10 — and granddaughter Chloe, 4.

Now, with Savannah recovering from a broken vertebrae after a horrific car accident last week (and a breakup), their willingness to candidly bare their tough times is as prominent as ever, with Savannah posting lengthy, heartfelt updates on social media — and slamming online trolls accusing her of texting and driving.

Here’s a look back at some of their other trials and tribulations over the years — and how they’ve learned to cope.

In addition to his eldest daughter Lindsie, Todd also has a son, Kyle, 25, from a previous marriage. Kyle, who stopped appearing on the show after season 1, has gone to rehab for drug abuse and also spent time doing charity work in Asia — under Todd’s orders — after being caught having an affair with a married woman.

In 2012, Kyle fathered a daughter — Chloe — with a woman named Angela Johnson. Todd and Julie now have custody of their granddaughter, who lives with them, and Kyle is currently estranged from the family. (Todd’s legal guardianship over his son, which he obtained when Kyle was 18, ended in October 2015.)

In October 2014, Kyle blasted his father in an interview with the Daily Mail, describing Todd as toxic and a snake who has “ruined me and he’s ruined the other three kids he’s had who are spoiled.”

Todd then revealed that Kyle allegedly suffers from bipolar disorder: “Kyle is bipolar and normally, people that are bipolar, they seek out a way to self-medicate, which is what Kyle has done since he’s been young,” he told E! News. “I want what’s best for him.”

Todd also refuted Kyle’s allegations that Chloe was on the reality show only because she’s a mixed-race child and that “would be good for his demographic.”

“That is not true,” Todd told E! News. “That is probably the most hurtful thing in the article. I’m not going to focus on Kyle’s stories because that’s my son and I love him.”

“My relationship hasn’t changed because of the things Kyle’s doing,” he added. “I love him the same since the day I brought him home from the hospital and held him the first time. I just have to love Kyle a little differently right now, because Kyle has to get back on his medicine. He has to get stable and understand — he knows the difference between right and wrong. They’ve all been brought up to know the difference.”

“He has his struggles,” Todd told PEOPLE in October 2014. “As a family, we all continue to lift him up.”

Around the same time the show premiered, the Chrisleys found themselves in the spotlight after documents surfaced revealing Todd’s 2012 bankruptcy filing, highlighting precarious finances despite extravagant spending habits.

The bankruptcy reveal came as a surprise to many, considering the show captures the family’s lavish lifestyle. (They have since relocated to Nashville, but the first three seasons were filmed in their 30,000-sq.-ft. Atlanta mansion with Todd boasting that in a year, the family sometimes spends $300,000 or more, just on clothing.)

According to the documents, Todd filed a petition for Chapter 7 bankruptcy protection in August 2012. Although he listed more than $4.2 million in assets, his debts totaled $49.4 million.

In October 2014, Todd told PEOPLE the bankruptcy case was “truly in its final phases” and that the family had “moved on from it.”

“It’s always hard when you have uncomfortable, unfortunate situations occur in your life,” he added. “But the family is all good, we’re all very blessed.”

In the weeks leading up to the show’s March 2014 premiere, the Internet flooded with rumors regarding Todd’s sexuality — which Todd said he’s been dealing with for years. At the time, the businessman told PEOPLE he’s proudly flamboyant, unabashedly enthusiastic about fashion, and yes, absolutely went to see Elton John for his 40th birthday.

“There’s no coming out,” he said. “What you see is what you get. I am what I am. Other people’s opinions of me are just not my business.”

Referencing a man who tweeted to him asking when he’s going to “come out of the closet,” Todd said he found his own way to deal with that kind of social media attention.

“So what?” he said. “I said, ‘I don’t live in a closet, but if you’d like me to escort you out of yours, I’m happy to do so.’ All of a sudden the tweet went away and he took it down because I flipped the script on him.”

Lindsie’s decision to elope for her January 2012 wedding to Will Campbell created waves among the Chrisley family — particularly with her father, Todd. Over the years, Campbell was largely absent from Chrisley Knows Best, and in August 2016, Lindsie announced their split exclusively to PEOPLE.

“He was my first love,” she said. “We got together when we were 19 years old, and over time we grew separately in different directions instead of together.”

The two share a 4-year-old son, Jackson, and Lindsie said she and Campbell have reached “an understanding and both respect each other” — which is all in their son’s best interest.

“I hope in the future that Will and I can be great friends,” she said. “He still holds a special place in my heart. I still love him, always and forever. I have nothing negative to say.”

“Going through a divorce myself, and Lindsie being a product of divorce, the conversations that she and I have had have been solely geared on how to protect Jackson and to let him know that his circle of love is just going to become larger,” added Todd. “I think that Lindsie and Will got married very young, not with our approval, but with that being said, he has been a very good dad to my grandson. He is a decent young man, and our family will always stand with him for the betterment of our grandchild.”

“I flew back to be with my brother and I had him moved to a hospital in Atlanta and he’s doing as well as he can,” Todd told E! News at the time. “He’s on his sixth round of radiation and first round of chemo, so he’s kinda knocked out right now.”

“But you know, we’re prayerful,” he added. “We lift it up to the Lord and we trust that whatever’s gonna happen is gonna happen and He’ll give us the strength to walk through it.”

And at the end of the day, the Chrisleys stick together through thick and thin.

“You couldn’t stage our crazy,” Todd told reporters in 2014. “[We’re] a real family that loves each other very much. There’s a lot of heart in the show, a lot of compassion for each other and the fact that we’re all for one, one for all.” 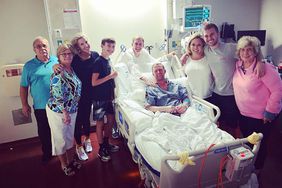 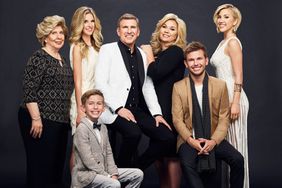