"You have some nerve to come at my daughter," Todd Chrisley wrote in response to the Instagram troll who called Savannah Chrisley "ugly"

Todd Chrisley is defending his daughter against an internet troll, who also called him gay in a series of mean messages.

Over the weekend, the Chrisley Knows Best star shared a screenshot of the direct messages sent to Savannah Chrisley and clapped back at the Instagram user, whose account has since been deleted.

In the thread, the troll attacked Savannah's appearance and her relationship with fiancé Nic Kerdiles and called Todd gay.

The account holder began by criticizing Savannah, 23, writing, "Honey why don't admit you have self esteem issues. That Botox isn't helping you it's making you more ugly. Some are born with natural beauty and some pay for it like you."

The troll then claimed that Todd is "denying" being gay.

"Why don't you admit your dad is a f------," the user wrote. "America sees that your dad is gay the more he keeps denying it will manifest itself."

Finally, the troll aimed at Savannah's romance with Kerdiles. "And admit Nic dumped you he don't want you. Honey the minute you start telling your man how to dress and get Botox he will distance himself from you and get p---- on the side."

After sitting with the messages for a while, Todd, 51, decided to publicly respond to the user.

"@tiffanygirlsnyc I sat with your message that you sent to @savannahchrisley and today since I had a few minutes, I decided to allow my f--dom to manifest enough to say 'F--- off ' you have some nerve to come at my daughter but after reviewing your profile, I see where the jealousy comes from," began Todd.

"Sweety if jabbing her about Botox is the best you got, then you are weak. I get that you don't have my DNA, but that's your mamas fault for not meeting me before she met your dad," he continued.

The Chrisley family patriarch then squashed any speculation about Savannah's relationship with Kerdiles, who still plan to wed after initially postponing their wedding.

"Now as to @nickerdiles, he's still in the same spot he's always been, right beside @savannahchrisley and our family, but nice try you thirsty trick," he wrote.

This isn't the first time that Todd has addressed speculation about his sexuality.

In 2014, Todd — who has five children and has been married to wife Julie for 24 years — said he'd heard the rumblings about his sexuality for years.

"There's no coming out," he said. "What you see is what you get. I am what I am. Other people's opinions of me are just not my business."

Todd said at the time that he was proudly flamboyant, unabashedly enthusiastic about fashion, and went to see Elton John for his milestone 40th birthday.

"So what?" he said, noting that a man tweeted a message to him asking, "When are you going to come out of the closet?"

"I said, 'I don't live in a closet, but if you'd like me to escort you out of yours I'm happy to do so.' All of a sudden the tweet went away and he took it down because I flipped the script on him," said Todd.

In an interview with The Domenick Nati Show in 2017, Todd admitted that it doesn't bother him that people continue to ask about his sexuality.

"In order for it to disappoint me, it would mean that I don't agree with someone being gay," Todd said on the radio program. "I don't believe that's a choice that you make. I believe that you are the way that God has made you."

He continued, "I'm flattered that people think I can get laid on both ends. So, that doesn't bother me," and added, "And my wife certainly is flattered that as many men want her husband as there are women. With that being said, I'm never going to have a drought. You on the other hand might. But Todd will never have a drought." 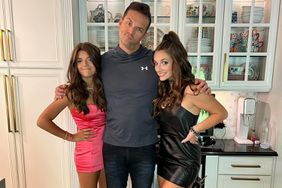