"What I do know is that it looks like she ends up on the right path," Susan Kelechi Watson tells PEOPLE about what's to come with Beth

This Is Us fans' beloved little island girl was front and center again.

In the latest episode, titled "The Music and the Mirror," Beth's (Susan Kelechi Watson) dance school shuttered due to the COVID-19 pandemic and she was left dipping her toes back into her previous career of urban planning — just to have the interviewer ask to reschedule due to double booking. That failed Zoom call made Beth realize that her corporate career was not to be revisited, and audiences saw more of how the end of her ballet journey halted in her college years. All the while, concerned husband Randall (Sterling K. Brown) was there to support his wife.

And in Los Angeles, Madison (Caitlin Thompson) went wedding dress shopping with her future mother-in-law Rebecca (Mandy Moore) and best friend/maid of honor Kate (Chrissy Metz). Across town, Kevin watched a screening of Glass Eye with director Foster and was confronted with the fact that the legal drama is a "piece of crap." After roaming the halls of his agents' office after an emergency meeting about his next project and his Hollywood reputation, the actor virtually found his ex Zoe (Melanie Liburd) waiting for her Zoom meeting in a nearby room, leading to a catchup chat after she learned about his engagement to Madison on the front page of a tabloid magazine.

Also on the west coast, viewers saw Toby (Chris Sullivan) with his father Allan (Dan Lauria) again after the stay-at-home dad called for help to repair a leaking pipe. But there were more underlying issues at the Damon household, with both Kate and Toby hiding their true feelings from one another as they navigate the transition of Kate returning to work at the music school for the blind and Toby remaining out of work after getting laid off.

Below, Watson tells PEOPLE about her character's future with dance and why it's only the beginning of Beth's backstory.

PEOPLE: Seeing Beth in her element at her own Clarke School of Dance was so nice. Unfortunately, the COVID pandemic indefinitely closed her small business; the coronavirus was an unforeseen health crisis. Was the studio closure a rewrite in Beth's overall storyline?

SUSAN KELECHI WATSON: It's very related to what's happening now with COVID, it's directly related to that. I know, for me, as the character it's something that I brought up and questioned as well. What would've happened to her dance studio? So many small businesses had to shut down and that was so concerning to me, just in everyday regular life. It was so concerning. I was really feeling for these people and realizing that Beth was in the same predicament. It just felt something that was important to note because we all watched her start up this company in the year before. For so many people who started up and were doing well, they had to close their doors. It was a poignant shout-out to those who had to go through that.

One of my favorite lines in that whole sequence was the moment where Beth says to one of the students who she's teaching on the Zoom, "Oh your screen froze," because it just felt that it was something that we all experienced. Trying to connect but you're unable to. That was the moment where Beth was trying to connect and being unable to, that's a very sad moment for her.

This Is Us: COVID Pandemic Will Have 'Lingering Effects' on the Pearsons as 'Potential Issues' Await

In a previous flashforward, audiences saw Beth teaching at what appeared to be a successful dance studio. Assuming that is her own business, what does the future hold for Beth's career?

Well, I wouldn't assume anything because I know as much about that flashforward as you guys do. But what I do know is that it looks like she ends up on the right path. And maybe, this moment actually propels her onto the right path. I can only hope that moments like this, when things are so unpredictable, you have to grow against your own will in a lot of ways because of the circumstance that you're in. I can only hope in moments like that, they're for a reason and can only help us propel in some way that we might not have gone for if not for this unforeseen circumstance. I'm hoping that it's all part of a movement and happy that it's not something that stopped her because we could've seen a flashforward of her at the bank. [laughs] Whatever happens, I'm just happy it didn't stop her dream of dancing and teaching dance.

This Is Us: Madison's Worst-Case Scenario for Wedding Dress Shopping with Rebecca Shocks Kevin

Young adult Beth (Rachel Hilson) said the mirror, which could be impartial and ruthless, can show flaws no one else even notices. Later this season, or perhaps season 6, will more of Beth's flaws and backstory be explored?

I feel like as time has gone by, season by season, she's been uncovering those things. I can only imagine that it could be part of it as well. As we get to know her, we see the cracks in her relationship with her mother and her feeling imperfect. She had a childhood where she had to be perfect, and now her dealing with the fact that she never felt like she could live up to that. Those feelings are what she's dealing with now. I would imagine there would be more of that as this next season unfolds.

The R&B romance is known to be couple goals and that ending scene to K-Ci & JoJo's "All My Life" was another reason to love Randall and Beth as she tearfully danced in his arms. Will Beth be okay?

I think there has to be some time for recovery. I feel like she's trying, but not right away. She's not okay right away, it feels like a big failure. For her, who wants to get it right and wants it to be perfect, to finally live out that dream and for it to fail was a big failure. She's going to need a little time to recover from that.

It was a surprise to see Zoe again! More scenes with you, Melanie and Phylicia Rashad would be so heartwarming to watch, especially with where Beth and Carol are lately.

Oh, anything is possible! I didn't know that Mel was going to be coming back into these episodes. But the door has always been left open for her and the possibility of her character coming back. I would say anything is possible, that's the fun of it. These characters really do come in and out of everyone's lives in a real way. That would be a really nice reunion! I haven't thought that far because, again, this show keeps me on my toes as well with what's going to happen next. We love when Mel comes back.

I missed her the day that she shot. Literally, she shot in the morning and left as I was coming in. Because of all the rules of COVID, you really don't cross paths with anyone you're not shooting with, they make it very safe that way. I didn't cross paths even if we might've been there at the same time. That's the tough part of shooting during COVID, it limits who you have access to seeing, even on set. It was lovely to hear, I wish I had a chance to hug her and say, "Hey."

Eris Baker, your onscreen daughter, teased a shift in Tess and Beth's relationship. Will viewers get to see more of their mother-daughter dynamic, possibly a resolution?

I feel like they're getting on the road to a better understanding of one another. It's all best intentions on Beth's part. She just feels like she's trying to get it right and trying to make her daughter feel as comfortable as possible with sharing her life with her. She wants that. She wants to have this relationship in the same one she does with Annie. The same way she's come to have with Deja. There were seasons when she was learning Deja and trying to figure that out. Now, Tess is coming into her teens this season and trying to figure that out and everything that comes with that. In real life, it takes a while. We may have an episode or two before they come to a resolution. Until now, they're still trying to figure it out.

You and your costars wrapped production on season 5. After the delays and all the new protocols, how does it feel to complete the second to last season?

We actually wrap today, today's the final day. I have to give the biggest shout-out and appreciation to Dan Fogelman, Steve Beers and everyone who makes This Is Us run. To our incredible crew who shut down their lives in order to keep the show going this year as safely as possible. What they had to do to put this together, like, 300 people working every day, without positive COVID tests was beyond my own imagination. I just cannot fathom the amount of work they had to do. It was an incredible feat, it was not easy. We got through a really hard season production-wise to get through, but we did it in the best possible way. We actually have season 5 in the can which is a miracle. My job was to show up and keep myself safe. But they made it run and deserve all the credit. 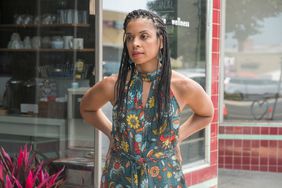 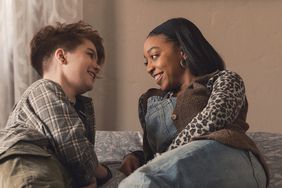 'This Is Us' ' Eris Baker on Portraying a 'Strong' Black Queer Teen: Tess Is 'True to Herself' 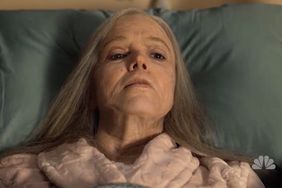