'This Is Us' Sneak Peek: Randall and Kevin Kick Off Their Long-Awaited Talk — 'Here We Go'

The big talk that This Is Us fans have been waiting for is finally here.

PEOPLE has the exclusive first look at this week's "Brotherly Love" episode in which Randall (Sterling K. Brown) and Kevin (Justin Hartley) will have their first sit-down in Philadelphia after that ugly fight in the season 4 finale.

Last March, audiences watched the Pearson brothers have their worst argument ever after Randall unloaded on his actor sibling about their late father Jack (Milo Ventimiglia). "He died ashamed of you," he told Kevin, even comparing the "shame [Jack] felt for [Kevin] and the pride he felt for me," later adding: "You're not even chasing Dad's shadow, Kevin, you're chasing mine. You'll never be him, and you'll never be me. Because you'll never know what it's like to devote yourself to anyone other than yourself. You'll pretend but it'll just be a performance, tired, stale performance — like all of your performances."

This season, Randall and Kevin have tried to communicate over the phone but could not find the right time for a proper discussion. After all, Randall was busy learning about his birth mother Laurel's history in New Orleans and managing his anxiety in a new transracial adoptee support group while Kevin has been busy with his newborn twins in Los Angeles after walking off the Vancouver set of the film that could possibly define his career.

This Is Us' Sterling K. Brown Teases Randall and Kevin's 'Conversation They've Been Looking to Have'

In the exclusive clip, Kevin arrives at Randall's house and they share some awkward small talk about Sudoku and Kevin's costar Robert De Niro — with Randall even quoting a De Niro line from the 1995 film Heat.

"You walked off the set on him. My brother, walking out on Bobby D," Randall says before reciting: "Don't let yourself get attached to anything you are not willing to walk out on in 30 seconds flat if you feel the heat around the corner."

"Look, I don't want to beat around the bush," Kevin says as Randall simultaneously asks, "Do you want water?"

This Is Us: COVID Pandemic Will Have 'Lingering Effects' on the Pearsons as 'Potential Issues' Await

This week, Kevin and Randall have finally slotted time in their schedules for this face-to-face meeting, something that both men know they have been putting off for a while.

"Look, I just feel like it would be easy to start catching up, you know, and fall back into our rhythm without actually talking. And I don't want this to get away from me. Randall, there's some things I need to say to you," Kevin tells his brother, who nods his head.

"Here we go," the city councilman replies as Kevin repeats: "Here we go."

As fans can recall Randall previously had a necessary conversation with their sister Kate (Chrissy Metz) about being a Black man who was raised by a white family. That tearful talk in the season 5 premiere took place at the family cabin on their 40th birthday amid the country's racial reckoning and Black Lives Matter protests following the killing of George Floyd.

Then, after Kate advised Kevin to have a meaningful heart-to-heart with Randall, Kevin briefly brought up their upbringing during a phone call with Randall. "If you really want to have that conversation, then I cannot wait to have it," Randall replied.

"Brotherly Love," directed by Kay Oyegun and written by Jon Dorsey, will explore Randall and Kevin's dynamic as viewers will also get to see the history of their relationship, specifically when they were teenagers. 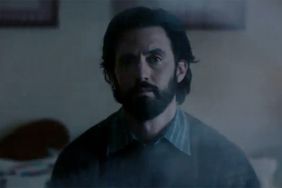 'This Is Us' Sneak Peek: Jack Is in Shock After His Mother's Death — 'It Doesn't Seem Real'