It happened. In Sunday night’s special post-Super Bowl episode of This Is Us, beloved patriarch Jack (Milo Ventimiglia) died of cardiac arrest after surviving his home’s fire-by-Crock-Pot.

Of course, fans are devastated by the loss of TV’s favorite dad. But wipe away those tears: We’ve known Jack would pass since season 1, and the NBC’s stars and creators have assured us that while we lost Jack, Ventimiglia isn’t going anywhere, thanks to the drama’s time-hopping structure.

“When they learn what happened to Jack, I think people are going to find themselves surprised with their own emotion,” Ventimiglia, 40, told Entertainment Weekly in January. “I really think people are going to have a hard time accepting it, but what they should know is that even when we do find out Jack’s death, it doesn’t mean that Jack goes away. That’s a good thing to remind people of — I’m not going away from the show, Jack is still around. There is still so much story to mine in this world of This Is Us.”

After all, he signed on to This Is Us knowing his scenes would all be bittersweet flashbacks.

“Going into this show I knew that my character was always going to be past and I was OK with it,” he told Entertainment Tonight way back in December 2016. “Dan Fogelman, our creator, he was like, ‘Milo, you’re not going anywhere.’ I’m like, OK, great!'”

RELATED VIDEO: The Reactions To The Surprising Twist About Jack’s Death On ‘This Is Us’

Still doubtful? We understand your trust issues — so take his on-screen soulmate Mandy Moore‘s word for it.

“Milo is No. 1 on the call sheet — he isn’t going anywhere,” Moore, 33, told PEOPLE in September 2017. “He is our leader. We call him our actor department head. If you want to know what’s going on in the show or have a question about something, Milo, without fail, has the answer.” 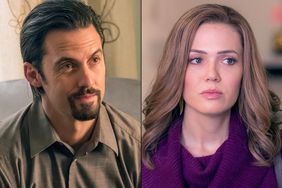 Mandy Moore: My 'This Is Us' Husband Milo Ventimiglia Is 'the Ultimate Partner in Crime'