Justin Hartley is a little jealous of costar Milo Ventimiglia‘s This Is Us nude scene.

On the pilot episode of the hit NBC series, Ventimiglia — who plays father of triplets Jack Pearson — bore his bare buns for audiences to see.

Sitting down with the ladies of The Talk on Monday, Ventimiglia’s costar Hartley, who stars as Kevin Pearson on the show, is open to following in his on-screen father’s footsteps — and is a little disappointed the same opportunity hasn’t come his way yet.

Asked if a nude scene has been presented to him yet, Hartley responded, “You know, the thing about it is — no, I’m a little upset about it.”

But Hartley, who is father to adolescent daughter Isabella Justice off-screen, is fine leaving nudity to Ventimiglia. “I just leave that to him. He’s very good at that.”

“He’s a tremendous actor and a very talented guy and a very sweet guy, but also a very good sport and just an awesome human being,” he gushed about his costar.

In October, physically fit Hartley revealed that frequently being unclothed or “eye candy” without intention behind it has bothered him at times.

“Yeah it has to be honest with you. I have no problem doing that kind of stuff when it’s necessary. You know for the show, especially in the pilot episode, we were telling that story, you know of this guy who is being objectified and sort of sick of taking his shirt off for no reason at all. It doesn’t matter what he’s doing, they want his shirt off,” Hartley told Access Hollywood.

“So the interesting thing about that is in order to tell that story you have to sort of show it in that story, right?” he said. “So I then had to have my shirt off quite a bit in the pilot. That I don’t mind at all, you know storytelling. But the gratuitous stuff it does, it gets a little old sometimes, right? And, raising a daughter, I see this stuff all the time. It’s a touch much sometimes.” 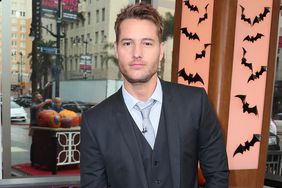