'This Is Us' Returns with Happier Times as Jack and Rebecca's (Awkward!) First Date Is Revealed

This Is Us fans may need double the tissues for season 3!

Season 2 of This Is Us was full of heartbreaking and bittersweet memories (that house fire! Jack’s death! Kate’s miscarriage!) and in season 3, fans were welcomed back with happier moments.

Kate kicked off her big day with Toby at a disappointing doctor’s consultation to begin IVF treatments. The couple was told that due to Kate’s weight, the egg retrieval process would be too “invasive” despite her 40-lb. weight loss. “At your weight, the chances of a successful pregnancy is risky … egg retrieval is invasive at your BMI,” the doctor said. But it’s Kate’s birthday after all: her birthday wish comes true as she and Toby later find out that their doctor would take the risk.

Across town, Randall takes Deja to his late father William’s house where he tells her that he and wife Beth (Susan Kelechi Watson) are thinking of adopting her. Little do the Pearsons know, Deja confronted her birth father similar to how Randall did with William in the season 1 premiere.

And then there’s Kevin. Though he tried to keep his new romance with Beth’s cousin Zoe a secret, Randall and Beth ultimately find out. “She will break you Kevin. … Her background is complicated. She eats men up and spits them out,” Beth warned him. Ahead of the premiere of his Ron Howard-directed film, Hill 400, he may be caught up in a new relationship with Zoe despite Beth’s forewarning.

4 This Is Us Burning Questions Answered: Yes, the Crew Cries Too

Meanwhile, fans and viewers time traveled back to the ’70s and found out more about the beginning of Jack and Rebecca’s first date after their chance meeting at a bar that was shown in season 1.

After returning from Vietnam and acclimating back to the real world, Jack has little finances and confessed to Rebecca that he only had $9 when he took her to the carnival, which was ruined due to the pouring rain. “If I bought the umbrella, I wouldn’t have enough to play any of the games,” he said. “You don’t bring a girl to a carnival and not let her play any games.”

The first new scenes of his time in Vietnam were shown in a flashback montage. “I don’t like talking about the war or my brother. It makes me sad. It makes me angry. But I like talking to you, a lot,” said Jack, who briefly mentions sibling Nicky, portrayed by newcomer Michael Arangano. “I’m sorry it was such a lousy first date, I’m really sorry.”

Mandy Moore Teases This Is Us Season 3’s Vietnam War Storyline: ‘It’s Really Powerful’
Mandy Moore Reveals She Knows How This Is Us Will End: It’ll Be ‘Very Satisfying for People’

Though Rebecca admitted “it was a pretty bad first date,” she ultimately fell for Jack’s charm and surprised him with their first kiss. But fans shockingly learned there’s another mustached man competing for Rebecca’s heart!

Back to the present day, Randall and adult Tess revisit that ominous “it was time to see her” moment from the season 2 finale. Fans found out in the season 3 premiere that Randall called old Toby, who was in bed, presumably still fighting depression. “I’m not coming, she doesn’t want to see me,” Toby responded before Randall told him, “No, she wants to see you.” Could the mysterious “her” identity be Kate?

RELATED VIDEO: Everything to Expect from This Is Us Season 3: War Flashbacks, New Babies and More

As for what’s to come this season, the cast previously told PEOPLE that a few puzzle pieces will fall into place by midseason. But in TIU fashion, there will be some curveballs as well.

“Episode four is a doozy. We’re going to see a side of Kate we haven’t seen so far. Kate hasn’t felt her feelings deeply and a lot of them are bubbling to the surface. As humans, we don’t always know how to handle them or express them. Sometimes anger is sometimes just sadness masked,” said Metz, alluding to the miscarriage last season as well as Toby’s battle with depression.

“There are a lot of complex issues and emotions that she’s handling. She’s a newlywed but in a lot of pain from her father’s death so there’s a lot that affects a new newlywed relationship. She’s really got to show up for Toby and herself. Every single thing is a lesson. Every single one of her family members is her teacher,” she added.

Meanwhile, Hartley teased: “We are knee deep in everything, like literally really, really deep in our storylines, like Jack’s backstory in Vietnam and Kevin’s sobriety and his new relationship.”

And Sullivan is excited for fans to see his character’s origin story. “I am going to have to go places as an actor I haven’t gone in a long time. I’m excited and terrified but it’ll be good,” he said. “For Kate and Toby, I’m interested to see if they continue to try and start a family and how they go about doing it.” 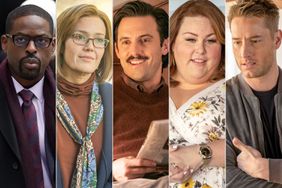 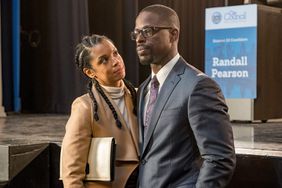 What's to Come in 'This Is Us' Season 3: 'Her' Is Revealed, Nicky's Fate and Kate's Baby Boy