'The Masked Singer' : Panda Is Unmasked and Revealed to Be Laila Ali

During The Masked Singer‘s second week of competition, the third season 2 celebrity contestant was eliminated from the Nick Cannon-hosted Fox singing competition series.

First, the Black Widow performed “I Wanna Dance with Somebody” by Whitney Houston, and judges’ guesses included Amber Riley and Yvette Nicole Brown.

“Oh. She can sing,” said McCarthy, who admitted to having “chills” after her performance.

The Leopard followed, performing “Somebody to Love” by Queen, with the panel of judges thinking it could be Billy Porter, Robbie Williams or Jamie Foxx.

After the audience’s votes were cast, it was announced that the Black Widow was the winner of the first face-off challenge.

Next up: the Flamingo vs. Panda.

Flamingo was first to perform, singing “Sucker” by the Jonas Brothers. The pink bird’s performance — and clues — had judges puzzled, questioning if she could be Olivia Jade Giannulli, Kandi Burruss or Tia Mowry.

Panda was second to perform in the face-off, singing “Stronger” by Kelly Clarkson. Among the famous names that were named by judges as to who the Panda could be included Laila Ali, Martha Stewart, Venus Williams, Ronda Rousey and Queen Latifah.

Unfortunately for the Panda, the Flamingo was named the winner.

In the final round of competition on Wednesday’s episode, the Leopard and the Panda, who were both in jeopardy, competed in the smackdown challenge.

The Panda was first to take the stage and belted out “All I do Is Win” by DJ Khaled, with the Leopard following second and singing “Respect” by Aretha Franklin. In the final moments of the show, the judges’ panel voted to decide who would carry on in the competition. Ultimately, the Leopard was named the winner, which meant the Panda had been eliminated.

But before the Panda revealed its identity to viewers, the judges made their final guesses as to who the celebrity could be, with McCarthy guessing Wanda Sykes, Jeong naming Latifah, Thicke thinking it was Loni Love, and Scherzinger suggesting Venus Williams.

So who was under the Panda costume? Retired and undefeated four-time world champion boxer Laila Ali!

“It was crazy!” Ali, who is daughter of the greatest boxer of all time, Muhammad Ali, said of being the Panda. “The suit, being hot, just singing through this mask. I feel like you couldn’t hear me. So it was a lot of fun.”

“I mean, I’ve always loved to sing, always been shy with singing, but it was fun to be able to perform without anyone knowing,” said Ali, 41.

Thicke, who named Ali as a possible celebrity that could be under the Panda costume, admitted that she had him “fooled.”

“As a joke, I said your name, but the padding with the outfit — I know your body type. I was like, that is not her body type,” he said, noting the large costume. “So, totally fooled.”

Ali added of the experience: “I will say, this is the first time I’ve ever lost something like this, so my heart, yeah … It was very humbling, but it’s been fun.”

While the producers made the clues harder for season 2, Cannon shared during the premiere that the 16 celeb contestants have a combined 42 Grammy nominations, 140 films, 35 No. 1 hits, 21 platinum records and 22 Broadway shows between them. The competitors also boast a total of 29 kids, 28 tattoos, eight divorces and two Time Most Influential People honors.

During the premiere episode, eight out of the 16 undercover celebrities faced off in four pairs. After intense battles between Butterfly (winner) and Egg, Thingamajig (winner) and Skeleton, Ladybug and Rottweiler (winner) and Tree (winner) and Ice Cream, the final smackdown was between Ice Cream and Ladybug. Ice Cream sang Devo’s “Whip It” and Ladybug countered with “Hit Me With Your Best Shot” by Pat Benatar, but in the end, the judges chose Ladybug as the winner.

Once it was time to unmask Egg and Ice Cream, audiences were shocked to find that Egg turned out to be Olympic ice skater Johnny Weir and Ice Cream was revealed to be video game streamer Tyler “Ninja” Blevins. 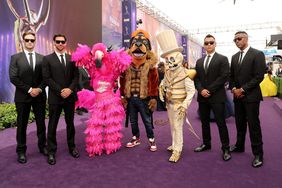 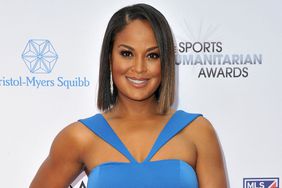