Could the former New England Patriots tight end be under the elaborate costume?

Rob Gronkowski, is that you?

Season 3 of The Masked Singer may have only premiered on Sunday, but some fans believe they already have one of the contestants figured out.

During the show’s premiere episode after Super Bowl LIV, six of the 18 new singers — Kangaroo, White Tiger, Llama, Miss Monster, Robot and Turtle — took the stage in costume for the first time. After viewers watched White Tiger open the show with a fun version of “Ice Ice Baby,” some audience members were convinced that the former New England Patriots tight end is under the elaborate costume.

After making its debut on the show, Fox posted the White Tiger’s performance to YouTube, where numerous account holders were also confident that 30-year-old Gronkowski is the man under the mask.

“If this isn’t Gronk, I will eat a football,” wrote one.

“I’m sure Patriots fans have already figured out who the White Tiger is by now,” commented a user.

Said another, “Originally I thought John Cena, but that’s 100% Gronk.”

The Masked Singer Fans Think Jordyn Woods Is the Kangaroo: ‘I’ll Put Money on It’

Looking back at the White Tiger’s first performance, numerous clues were provided, including a trophy for Ultimate Champion for Clam Shucking, a Four Score and Seven Years Ago… poster, and the disguised celebrity saying, “Ready to meet your next champion?”

Following the tiger’s debut, panelists Jenny McCarthy, Ken Jeong, Nicole Scherzinger and Robin Thicke named their guesses — and surprise surprise, Gronkowski was among the stars that were mentioned. (John Cena, Jason Momoa, Tyler Perry and Michael Strahan were also among the guesses.)

“It’s the most powerful I’ve ever felt,” the White Tiger said about how they feel being under the mask. “Like I could conquer anything. I never want to take it off.”

Three nights later, the White Tiger returned to The Masked Singer stage for their second performance, this time singing “Good Vibrations” by Marky Mark and the Funky Bunch.

The Masked Singer Season 3: The Llama Gets Eliminated — and Is Revealed to Be Drew Carey!

And once again, fans were quick to suggest that Gronkowski is the performer.

“Definitely the Gronk himself his persona is unhideable,” a YouTube user wrote.

“This is Rob Gronkowski?,” commented another.

“Gronks voice is a dead giveaway when he performs,” said a YouTube commenter.

In addition to Charles Haley and Hulk Hogan, Gronkowski was again included in the panelists’ guesses of the celebrity behind the White Tiger mask. 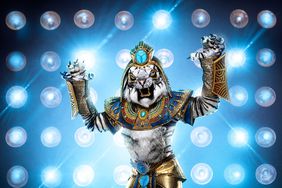 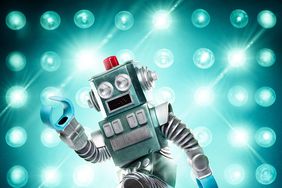