Broadway star and The Cosby Show actress Ethel Ayler died last month in Loma Linda, Calif., her family announced on Friday. She was 88.

“With a career spanning over five decades, Ayler had a recurring role as Carrie Hanks, [Clair] Huxtable’s mother on The Cosby Show has come home to rest,” they wrote on The Mobile Register and Baldwin County obituaries’ site.

From Penny Marshall to Aretha Franklin: Remembering the Stars We’ve Lost in 2018

Ayler played Clair Huxtable’s (Phylicia Rashad) mom Carrie Hanks on The Cosby Show, recurring throughout the sitcom’s run from 1984-92. In real life, Ayler was only 18 years older than Rashad.

RELATED VIDEO: Penny Marshall, Beloved Sitcom Star and A League of Their Own Director, Dies at 75

Alabama native Ayler got her start in the theater, making her Broadway debut in Jamaica in 1957. She went on to appear in August Wilson’s original 1987-88 Broadway production of Fences alongside James Earl Jones and Courtney B. Vance.

Ayler also had parts in films Eve’s Bayou, The Bodyguard and To Sleep With Anger, and made guest appearances on Sister, Sister, Melrose Place, Friends and 7th Heaven — her last Hollywood role in 2006. 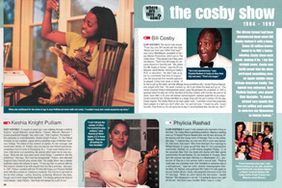 TV's Reigning Mom, Phylicia Rashad, and Her Football Hero, Ahmad, Revel in a Match Made by Bill Cosby

It's a Different World for Dancer and Choreographer Debbie Allen: She's Moved to Prime-Time Directing

'Roseanne', '7th Heaven' and 'The Cosby Show': All the TV Shows Pulled Because of Their Stars' Scandals