"I support his willingness to share his truth, and welcome the additional LGBTQ representation to Bachelor Nation with open arms," Adams, 30, tells PEOPLE

Tayshia Adams is supporting her ex Colton Underwood after he came out as gay on Wednesday.

In a statement to PEOPLE, Adams, 30 — who was a runner-up on Underwood's season of The Bachelor — said she's "very happy" for the former Bachelor star.

"I'm very happy that Colton is able to now live his life openly and without fear of being his true self," she tells PEOPLE. "I support his willingness to share his truth, and welcome the additional LGBTQ representation to Bachelor Nation with open arms."

Underwood, 29, announced he was gay during a sit-down interview with Robin Roberts that aired on Good Morning America Wednesday.

During the personal conversation, titled "Colton Underwood: In His Own Words," Underwood said he "came to terms" with his sexuality earlier this year after a long period of self-reflection.

"I'm emotional, but in such a good, happy, positive way," he added. "I'm the happiest and healthiest I've ever been in my life, and that means the world to me."

Bachelor Nation Stars React to Colton Underwood Coming Out as Gay: 'You Have My Love and Support'

Following his GMA interview, executive producers of The Bachelor issued a statement of support for the reality star.

"We are so inspired by Colton Underwood's courage to embrace and pursue his authentic self," they said. "As firm believers in the power of love, we celebrate Colton's journey in the LGBTQIA+ community every step of the way."

Several other Bachelor Nation stars also rallied around Underwood, including many from his own seasons.

Hannah Godwin, another runner-up on Underwood's season, tells PEOPLE that she supports the former Bachelor lead and wishes him "the very best."

"I support Colton for having the courage to finally be able to live his life authentically," she says. "Nobody should have to hide who they really are. I'll always wish Colton the very best and hoping he has found his peace."

Longtime Bachelor host Chris Harrison also expressed his support for Underwood in an Instagram post after the GMA interview aired.

"Very proud of you today @coltonunderwood Happy to see you stand up and openly live your truth," Harrison wrote alongside a picture of the pair. "You have my love and support my friend."

Another one of Underwood's contestants, Nicole Lopez-Alvar, wrote in her own tweet that she is "so proud" of him.

"Proud of you for having the courage to come out and be honest with yourself and the world," fellow season 23 contestant Catherine Agro shared on her Instagram Story.

Demi Burnett, who came out as queer following her time on Underwood's season, tweeted, "Welcome to the community brother." 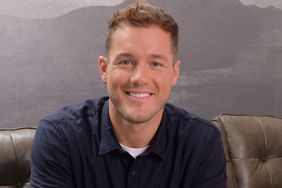 Colton Underwood's College Football Coach and Teammates React to Him Coming Out as Gay: 'Couldn't Be Happier'