Tahj Mowry and Naya Rivera dated in the early 2000s

Tahj Mowry is remembering Naya Rivera nearly one year after her death.

The actor, 34, paid tribute to the late Glee star in an interview with Glamour published Wednesday, calling Rivera his "first celebrity crush."

Mowry — who co-starred with Rivera in the sitcom Smart Guy and dated her between 2000 to 2004 — said the news of her death last year "was really, really rough."

"I have so much respect for her family," he said. "I still am in communication with them, so I just want to make sure I'm respectful of that and what her family is going through. She was definitely my first everything. I think subconsciously it's why I never really date like that because no one really ever... I know someday someone might, but it's hard to measure up to the type of girl and woman she was."

In her 2016 memoir, Sorry Not Sorry, Rivera revealed Mowry was her first boyfriend.

Mowry told Glamour he still has a hard time talking about Rivera and trying to encompass all that she meant to the people who loved her.

"It's a hard thing to talk about, because to think about her mother and her ex-husband, her child and her sister and her brother…the height of what they went through is times a thousand," he said. "I almost feel like I can't even talk about my feelings because they don't even measure up to the pain that they went through and are still going through. But yes, much love to her entire family — her brother, her sister, her child, and her ex-husband as well."

Rivera was confirmed dead in July 2020, five days after disappearing during a trip to a California lake with her son Josey, now 5. She was 33.

Mowry previously shared an emotional post in honor of Rivera as police were searching for the actress after she went missing, writing that the situation felt like "a nightmare."

"We grew up together. We became adults together. We experienced so many firsts together. You were my first experience with everything; love, intimacy, heartbreak. We broke each others hearts and then mended them back together...more than once," Mowry wrote alongside a sweet black-and-white photo of the pair.

"I will never not think of you. No woman has ever measured up what you gave me or how you made me feel. I've never liked to admit it but I have never stopped loving you. A part of me always wished for the day where God would bring us back together to be what we dreamt we could have been."

Mowry said he wished he had been able to tell Rivera how much she meant to him.

"Naya, I miss you deeply. I wish I got the chance to tell you that once more, but I'm believing I will get that chance. I know deep down you've always known how I felt," he continued. "I look forward to the day where I can see your beautiful face once more and tell you everything I've wanted to say that I didn't get the chance to say. I love you forever. I always have and I always will. " 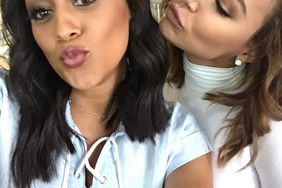