"I am pretty sure I am not the only one from #patriotsnation celebrating @buccaneers," she wrote on Instagram

Congratulations are in order for quarterback champion Tom Brady — including from his ex!

"I am pretty sure I am not the only one from #patriotsnation celebrating @buccaneers," Moynahan wrote alongside a photo of Brady from the game, adding hashtags "#Soproud," "#strong" and "#greatgame."

Back in 2019, the actress opened up in an interview with PEOPLE about the scrutiny she faced after the couple's breakup years prior. She spoke about expecting a baby with the NFL legend after they had broken up and he had moved on with now-wife Gisele Bündchen in 2007.

"Tom and I made a decision to raise a child together and we both found partners that not only supported us in raising that child, but also loved our child as if he was their own," she told PEOPLE at the time. "I don't think you can ask for more than that. My son is surrounded by love."

On Sunday, Brady won the MVP award after his team defeated the Kansas City Chiefs 31-9 at home.

"I'm so proud of all these guys out here," he said of his teammates after the game. "We had a rough month of November … we came together at the right time. I think we knew this was gonna happen tonight, didn't we?"

He also told the crowd, "This team is world champions forever, you can't take it away from us."

The Buccaneers finished with a 12-5 record in their first season with 43-year-old Brady, who left his longtime home in New England during the offseason. He's been helped by his former Patriots teammate Rob Gronkowski, who also joined Tampa Bay before the start of the season. 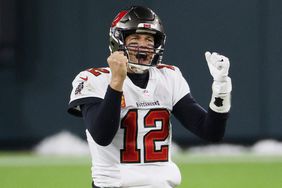