Sunny Hostin Reflects on 5 Years at 'The View' : Fans 'Know My Place in the Show's History'

"It's an iconic show, and I know that I've made lifelong friends," the lawyer and journalist told PEOPLE

In a few months, Sunny Hostin will celebrate her five-year anniversary at The View.

In her 2020 memoir, I Am These Truths, Hostin, who is Black and Latina, detailed her first years at The View — a time she says she got paid less than her white colleagues and was told to "stay in her lane" when it came to certain topics.

Today, with five years under her belt, Hostin says she's proud of the path she's forged.

"I think people know who I am now — and they know my place in the show's history. I don't know that I need [the acknowledgment] anymore," she told PEOPLE while promoting her debut novel, Summer on the Bluffs. "I did at one point, but I think I found my way. I think people know my place in the show's history. And I'm proud of that."

Created by Barbara Walters, The View launched in August 1997 with a mostly white panel. In recent years, there have been more co-hosts of color than ever before. "We have a diversity of opinion, and we certainly represent different age groups. We can always do better, but we do pretty well," Hostin said of the diverse panel of the current season, which has largely been filming virtually due to the COVID pandemic.

"We like each other and we respect each other. We talk about things that most people are not supposed to talk about even in private spaces. I think that a lot of people can learn from how we do it because we speak about it with respect," Hostin continued. "We don't always get it right, but we at least have the respect and friendship so that we can come together and do it the very next day. I think that is certainly a credit to my co-hosts, our staff, our producers and just to our entire team."

Recently, Goldberg — an EGOT winner who has served as The View's moderator for more than a decade — told Variety that she'd stay with the show as long as it allows her "to do both [acting and hosting]." So how many more seasons does Hostin, an attorney and senior legal analyst for ABC News, see herself at The View?

"It's an iconic show, and I know that I've made lifelong friends on the show. It's a platform like no other," she said. "I often say it's like a sorority. I don't think you understand what it's like unless you've actually been on the show."

"So I'm feeling the same way [as Whoopi]," she added. "I'm feeling like I'll be there for as long as they'll have me. It's really an honor to sit at the table that Barbara Walters built. So stay tuned, more to come." 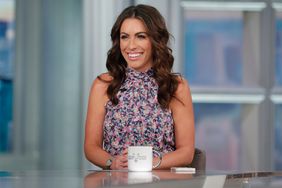