Though the series is only on its fourth season, its stars have changed so much

Just 11 (ha!) when the series started filming, British actress Brown had bit parts on her résumé.

Since Stranger Things has taken off, the 18-year-old has become a fashion icon, joined the latest Godzilla franchise, appeared in Maroon 5 and Cardi B's "Girls Like You" video with a slew of stars and plays the titular character in Netflix's Enola Holmes.

Wolfhard, a.k.a. Mike Wheeler, was 12 when Stranger Things began filming.

Now 19, Wolfhard has racked up credits including It, Carmen Sandiego, The Goldfinch and Ghostbusters: Afterlife.

Proof that Matarazzo, 13 when he took on the role of Dustin Henderson, has grown up? He went to junior prom with his "beautiful girlfriend" in May 2019.

Now 19, Matarazzo's upcoming credits include My Father's Dragon, Honor Society and Hump. Next up, he'll join the cast of Broadway's Dear Evan Hansen.

He was 14 when he landed the role of Lucas Sinclair.

Now 20 years old, McLaughlin announced in 2019 that he would be heading to college.

On the younger side of the crew, Schnapp was also just 11 when he stepped into Will Byers' cursed shoes.

Now 17, Schnapp has acted in films like Abe, Waiting for Anya and Hubie Halloween since starring in the Netflix show.

The show has changed her life in the industry, as well as personally: she's dating costar Charlie Heaton.

The oldest of the young bunch, 30-year-old Keery plays heartthrob with a heart Steve Harrington.

Of his younger costars, he told PEOPLE, "I wish they would stay as little kids forever. No, they're amazing. It's really crazy because you come in the first year and you're not really sure if you're going to work with these people again, and when you come back, these little kids are like full-blown adults. It's been awesome to ... see them handle everything with such grace." 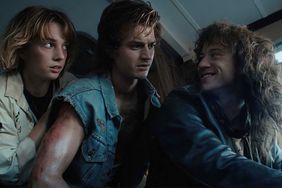