Family and friends remembered Joel Taylor at a funeral service Monday after he was found dead aboard a Royal Caribbean Cruise ship on Jan. 23

Joel Taylor was laid to rest in his hometown of Elk City, Oklahoma, on Monday after he died nearly one week ago while traveling aboard a Royal Caribbean Cruise ship.

The funeral service for the late Storm Chasers star was held at 2 p.m. at the First Baptist Church in Elk City, the Martin-Dugger Funeral Home confirms to PEOPLE.

Taylor’s best friend and former co-star Reed Timmer posted on Twitter on Sunday that the Dominator 1 — the armored storm-chasing vehicle Taylor used on the Discovery Channel series — would be heading to Oklahoma to honor him.

Dick McGowan, who was also featured on Storm Chasers, posted ahead of the service on Twitter that “everyone is welcome to attend.”

Taylor was found dead in his cabin on Jan. 23 aboard the Royal Caribbean Cruise ship Harmony of the Seas, which docked in San Juan, Puerto Rico. He died at the age of 38.

Though Taylor’s autopsy was completed in San Juan late last week, the results — as well as his toxicology report— have not yet been released.

“As is our standard procedure, law enforcement was notified and responded to the ship when it arrived in San Juan, Puerto Rico, on Tuesday, January 23,” Owen Torres, manager of global corporate communications for Royal Caribbean Cruises, previously said in a statement to PEOPLE.

“We extend our most sincere and heartfelt condolences to the family and friends of the 38-year-old male guest from the United States who died while onboard Harmony of the Seas. A member of our Care Team is providing support and assistance to his family,” Owen Torres, manager of global corporate communications for Royal Caribbean Cruises, said in a statement to PEOPLE.

At the time of Taylor’s death, the cruise liner was hosting Atlantis Events’ all-gay Caribbean Cruise which sailed from Ft. Lauderdale, Florida, on Jan. 20 and returned on Jan. 27.

Taylor’s friends, including Timmer, shared the news of his death on social media. Timmer dedicated a touching message to him along with photos of them when they were chasing storms together since 2008.

“RIP my best friend and storm chasing partner, Joel Taylor. I am shocked and absolutely devastated by the loss of my incredible, caring friend,” Timmer wrote. “We chased so many intense storms, and I wish we could have just one more storm chase. I’ll miss you forever, Joel. We lost a legend.”

The Discovery Channel also released a statement to PEOPLE: “We are so saddened to hear about Joel’s passing. We will always remember him fondly as an incredible meteorologist and driver of ‘The Dominator.’ Our thoughts and prayers are with his family and friends at this difficult time.”

In lieu of flowers, the Taylor family wishes for tributes to be made to the Oklahoma University Foundation in his name. 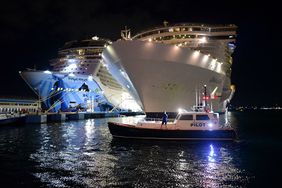