'Southern Charm' 's Eliza Limehouse Is Engaged! Inside Her Perfect Proposal: 'It Was Like a Dream!'

"It was too good to be true," newly engaged Southern Charm star Eliza Limehouse says of the proposal Struthers McBride planned

Congratulations are in order for Eliza Limehouse and Mark “Struthers” McBride, Jr.!

The Southern Charm star and her beau are engaged to be married after nearly a year of dating, PEOPLE can exclusively reveal.

“This is the happiest I’ve ever been,” Limehouse tells PEOPLE. “It’s so crazy, from the moment Struthers and I stared dating, I knew he was the man I was going to marry. I’m not kidding you when I tell you, there were fireworks going off! And every moment since then, I’ve just fallen more and more in love with him.”

Limehouse, 24, and McBride, 29, have been dating since April 2019, though they have known each other for much longer.

The pair’s families have political ties in Southern Carolina going back decades (her dad and grandfather in the legislature, and his dad the former mayor of Myrtle Beach), meaning that McBride was a presence in Limehouse’s life long before the two ever found romance together.

“We’ve known each other since we were kids and we’ve always crushed on one another, but neither of us were ever single at the same time,” Limehouse says. “It was always he had a girlfriend, or I had a boyfriend. The timing was never right.”

All that changed when Limehouse was asked to model for a bridal spread photographer Anne Rhett was shooting. Single at the time, she called up McBride and asked him to help out. Four days later, McBride called and asked Limehouse out, telling her, “‘I want you to be mine.’ ”

“Ever since that day, we’ve been inseparable,” Limehouse recalls. “It was just meant to be.”

Marriage talk started “probably a month into dating,” Limehouse says — which “didn’t feel too soon because we’ve known each other for years and years ahead of time.”

McBride, who runs a car detail business, got down on one knee in January while Limehouse was brushing her teeth in the bathroom.

“It was totally out of the blue, but he couldn’t wait any longer,” she says. “He had told my cousin he wanted to propose during Christmas and I was like, ‘Please tell him not to do that, the holidays are chaos enough and I don’t need another thing to celebrate each year at that time. Have him find another time!’ So he put it off, but he was done waiting and just got down on one knee and said, ‘You know, I really want to marry you!’ I looked at him like, ‘I want to marry you! I’m brushing my teeth!’ ”

A formal proposal came last week — this time with a ring, which McBride had helped design himself.

“I have a fine jewelry line, so he went through my manufacturer to make this really cool funky ring that no one else would have,” Limehouse says of the rock, which features a marquise diamond with a bubble halo of diamonds around it set on a rose-gold claw prongs. “It’s absolutely gorgeous. He did an amazing job.”

He also added a personal touch: a small diamond underneath the main diamond, just for Limehouse.

“I always love, when I make pieces for myself, to have a little hidden stone behind the pendant or under the ring that no one else knows about, so he and the manufacturer worked together to add that,” she explains. “It’s this little diamond, that only I can see. And his birthstone is a diamond, so I told him, ‘When we have children one day, we can put their birthstones on either side of it.’ It’s so special.”

Best of all, McBride made their whole bond come full circle by popping the question to Limehouse while she was on a shoot with — you guessed it — Rhett.

The shutterbug was able to capture their happy moment, in a series of photographs shared with PEOPLE.

“I was doing a shoot for my jewelry line at Airy Hall, my family’s estate outside of Charleston, and he showed up looking so handsome,” Limehouse remembers. “And now, every single person in my family has gotten proposed to or married at the property’s overlook. But he knows I love the Avenue of the Oaks, the tree-lined path right where you drive in. That’s, like, my heart. And it’s also where they filmed a scene from The Notebook, which is my favorite movie ever. So he took me there, and that’s where he proposed.”

“I was like, ‘Oh my God,’ ” Limehouse says of the moment he popped the question. “It was too good to be true. It was like I was in a dream. Completely perfect. I can’t imagine it going any better.”

Since then, Limehouse has been on cloud nine. As for wedding plans, she isn’t ready to go down that path just yet.

“He wants to get married yesterday, so it’ll probably be sooner rather than later. But my brother got engaged a month before I did, and my business partner is about to get married, so I just want to enjoy this phase of being engaged for a little bit,” she says.

And though Limehouse is still torn on what type of wedding she’d like — wavering between a big traditional Southern wedding, like her mother and grandmother would want to throw, and something small and private that leads into an elegant party without the stress of the more formal wedding rituals — in the end, she’s just happy to be with McBride.

“I kissed a lot of frogs before I met Suthers, and being with him has just made me realize what I was missing out all those years,” she says. “I knew him as a friend, I knew him as a boyfriend, I’m now knowing him as a fiancé, and I’ll get to know him as my husband one day. How cool is that?” 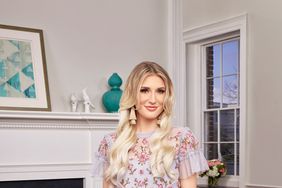