Sofia Vergara is taking a trip down memory lane.

On Tuesday, the 47-year-old actress shared some throwback clips of her days as a host for the Spanish travel show Fuera De Serie with Argentinian TV personality Fernando Fiore. Vergara worked alongside Fiore on the series from 1995 to 1998.

In the first part of the clip, Vergara can be seen strutting along a beach in El Salvador, donning a yellow bikini as she confidently talks about the South American country and its many popular beaches.

Later clips showed Vergara and Fiore bantering with one another while at the Busch Gardens in Tampa, Florida. The actress joked with her viewers that they were on a safari in The Democratic Republic of the Congo and that she was excited to meet Tarzan before Fiore jumped in to correct her about their location.

Vergara’s time on Fuera De Serie helped make her a household name in Latin America after she was first discovered by a photographer on a beach when she was just 17 years old.

Several of her fans reminisced about watching the popular travel and lifestyle series in the comments section of her post.

“Omg I remember watching this when I was younger!!” one fan wrote, while another added in Spanish, “I loved that program, unique in its style❤️.”

“I remember well when they were showing the program on television. I think on weekends,” a third said. “Wow .. How time goes by! 😊”

The Hot Pursuit star also shared a present-day shot of her bikini body, uploading the steamy photo to her Instagram Story with the caption, “Pretending she is on vacation!”

She later shared a snap from dinner with husband Joe Manganiello. The couple dined on rice with coconut, and what looked to be some kabab skewers.

Vergara and Manganiello first met at the White House Correspondents’ dinner party in 2014. They later went on to tie the knot in November 2015.

The Magic Mike actor recently opened up about the day he and Vergara first met, telling Jess Cagle on his SiriusXM show, The Jess Cagle Show, that he was immediately smitten with his now-wife when he first laid eyes on her.

RELATED VIDEO: Sofia Vergara and Joe Manganiello in Bottom of the 9th

Manganiello was Cagle’s guest at the dinner, bringing his brother Nicholas as his plus one. “As we’re walking around, who comes swooping down in front of us for about 100 yards is Sofia Vergara,” he said. “She was wearing this dress that looked great on her, and I just could not take my eyes off of her.”

They were finally introduced to one another later that night by Vergara’s Modern Family costar Jesse Tyler Ferguson, who also gave Manganiello the actresses number when she announced her split from her then-fiancé, Nick Loeb, three weeks later.

After Ferguson gave Manganiello Vergara’s phone number, he immediately called her up and the two chatted while Vergara was in New Orleans filming Hot Pursuit. He then flew to the Big Easy for their first date — “and the rest is history.” 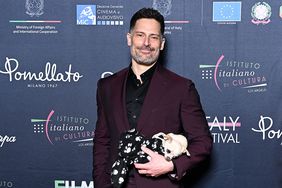 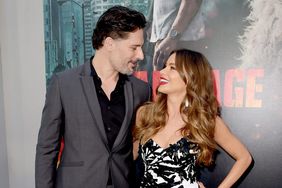