Sofia Vergara and Joe Manganiello are set to the tie the knot this weekend in Palm Beach, Florida

Sofia Vergara and her fiancé Joe Manganiello have arrived in Miami ahead of their wedding weekend.

The couple is set to tie the knot this weekend at The Breakers Resort in Palm Beach, Florida.

Vergara’s family also appears to have landed in Miami: Her son, Manolo Gonzalez-Ripoll Vergara, 23, took to Instagram Friday to share a couple of fun selfies of him and three others upon arriving at the hotel.

As the caption to another picture, Monolo joked: “We’re not slurring our words; we are speaking in cursive. #Jof a.”

They kicked off the celebrations with a cocktail party on a private beach for their friends and family Thursday afternoon, according to E! News.

Vergara, 43, who recently admitted she had a little bit of “bridezilla” in her and is very detail-oriented, is sure to pull out all the stops for the days of festivities ahead with friends and family.

Among those invited is Vergara’s Modern Family costar Julie Bowen, who recently teased details of the wedding to PEOPLE, revealing that the “only thing” she knows is that couple chose not to do official wedding photographs.

“I love that because it says to me, ‘We’re not going to spend a lot of time on the traditional, we’re just going to get to the fun,’ ” Bowen said.

Vergara has been dating the Magic Mike hunk, 38, for almost a year and half.

Their romance started heating up in July 2014, and Manganiello proposed to Vergara almost six months later during a romantic trip to Kauai.

During an interview for PEOPLE’s issue’s Sexiest Man Alive issue, Manganiello said he couldn’t wait to tie the knot because the best part of getting married is “not having to change anything.”

“It was finding someone who complemented me perfectly,” he added. 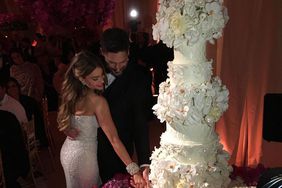