Sharon Osbourne is getting candid about her sex life.

During Monday’s episode of The Talk — where the co-hosts discussed the topic of intimacy with their partners — Sharon was asked if she and husband Ozzy Osbourne still have sex.

“This is a bone of contention in our house,” revealed the 65-year-old television personality. “Because he’s got a problem. He’s just like a rabbit.”

While it seems Ozzy, 69, is always in the mood, the feeling is apparently not mutual for Mrs. Osbourne.

“I am like, birthdays, Christmas,” said Sharon. “At this point in my life, it’s special occasions.”

“We’re in our 37th year. … No wonder he fiddles other people,” she joked, seemingly referencing Ozzy’s previous infidelity, before clarifying: “No, he doesn’t, he doesn’t. He’s a good boy.”

In August 2016, Ozzy was admitted to rehab for sex addiction after it was revealed that he allegedly had an affair with his hairstylist, Michelle Pugh. The Black Sabbath frontman reportedly also had affairs with six other women.

“Some Russian teenager, then a masseuse in England, our masseuse [in the U.S.], and then our cook,” Sharon said of the multiple affairs. “He had women in different countries. Basically, if you’re a woman giving Ozzy either a back rub or a trolley of food, God help you.”

Added The X-Factor judge: “When I found out about the hairdresser, I couldn’t believe it. Because none of these women were show ponies; he was doing it to fill the void in some way.”

The couple — they share children Kelly, 33, Jack, 32, and Aimee, 35, together — split up in May 2016 after the cheating reports surfaced, but they didn’t stay apart for long. Four months later, Sharon and Ozzy reconciled their marriage.

“I forgive. It’s going take a long time to trust, but we’ve been together 36 years, 34 of marriage,” Sharon told her Talk co-hosts at the time. “I just can’t think of my life without him.”

Eight months after reconciling, Sharon and Ozzy renewed their vows in Las Vegas on Mother’s Day in May 2017.

Although it was the second time that the couple said their vows to each other, Ozzy told Hello! Magazine after the intimate ceremony that the event represented a new start for him and their relationship.

“For me, this was actually our real wedding day. This is the one that I will remember,” Ozzy explained. “Sharon and I have been through so much, and this honestly feels like a new beginning.”

“I made a huge mistake,” he continued. “Without Sharon, I am nothing. I love her. I can honestly say that I have never loved anybody other than my wife.”

Sharon Osbourne Reveals Ozzy Cheated on Her with Six Women: 'He Had Women in Different Countries' 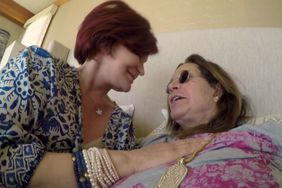 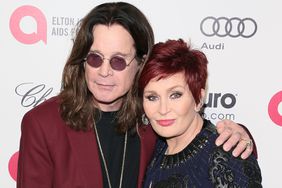