The actor tells all about his Sexiest Man Alive episode of Don't Trust the B–– in Apt. 23

The horse didn’t seem to mind, but for the actor, climbing aboard and posing naked was a bit awkward.

The episode, in which Van Der Beek ends up as PEOPLE’s sexy cover guy after a prank is pulled on the magazine staff by the character Chloe (Krysten Ritter), featured a photo layout of the actor wearing only a shirt as he rides a horse.

“One shower later, it all was good,” said the real Van Der Beek.

As the camera captured the moment, the actor’s wife Kimberly watched the nearly naked shoot – and described it as “surreal.”

As for the photo subject himself, Van Der Beek, 35, said: “It was a lot of fun to do something that is tied to something so culturally relevant. “And just to … drag PEOPLE into our own demented world on the show, and have you guys be such great sports about it, was a lot of fun.”

So did his wife find it at all sexy, a nude ride on horseback? Not exactly, she said. She was more worried about his safety.

“I don’t how sexy it is when there’s, like, 30 people around,” said Kimberly. “You have to be careful about how you’re getting on that horse! I was more concerned.” 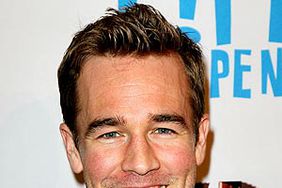 Picks and Pans Review: Apt. 23 Behind the Scenes