Scott Disick appears to be getting close to someone new.

Disick, 37, was spotted with 19-year-old Amelia Hamlin in Santa Barbara, California on Monday. The two were photographed walking arm-in-arm down a beach together.

In the photos, obtained by TMZ, Disick is seen with his arm around Hamlin's shoulder while she held onto his hand.

Disick kept his look casual for the afternoon outing in a pair of black shorts with a matching shirt, while Hamlin, the daughter of Lisa Rinna and Harry Hamlin, wore a floral bikini.

Reps for Disick and Hamlin did not immediately respond to PEOPLE's request for comment.

This isn't the first time the two have been seen together recently. Earlier this month, they grabbed dinner with their mutual friend, stylist Marie-Lou Bartoli. The group documented the night on social media, sharing similar photos of their food.

While neither has commented on the status of their relationship, a source recently told PEOPLE that Disick is not in a rush to start dating again after his split from Sofia Richie earlier this year.

"Scott is single, having fun and enjoying life," said the source. "He is doing well and staying healthy. He is not partying."

"He hangs out with friends, including girls," the source continued. "He is not interested in dating anyone right now though."

Disick and Richie, 22, officially split in August after nearly three years together. They initially went on a break in May, then briefly reunited during the summer before parting ways again.

At the time, a source told PEOPLE that Disick was focusing on his recovery after he sought treatment at a rehab facility in April to work on past traumas. (He checked himself out and flew back to Los Angeles shortly after a photo of him inside the Colorado facility was leaked online.)

"Scott's focus is his health and the kids," the source said. "Sofia wants to hang out with friends and enjoy the summer. Since they are no longer on the same page, they decided to just be apart."

Scott Disick Is 'Not Interested in Dating Anyone Right Now' After Sofia Richie Split: Source 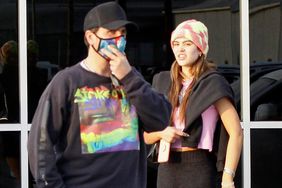 Scott Disick and Amelia Hamlin Return to L.A. After Spending New Year's Together in Mexico