After the Matt Lauer scandal rocked Today, Savannah Guthrie and Hoda Kotb had to press on. But they knew there was something special happening.

Kotb’s promotion to full-time co-anchor on the NBC morning show made the duo the first female team to helm Today in its 66-year history. During a joint appearance on The Tonight Show Starring Jimmy Fallon on Wednesday, the women said the chemistry was there.

“Savannah and I started anchoring together and it’s weird,” Kotb, 53, said. “If you’ve ever met a friend and had a moment and said, ‘Wow, that was so much fun!’ It works and it’s so much fun.”

Guthrie, 46, added, “Hoda said it was like a first date, and I’m easy and desperate. It just clicked and felt so good. We’re so happy.”

Though their pairing came at a difficult time — Kotb had been filling in for former co-anchor Lauer after he was fired in November for alleged inappropriate sexual behavior before being announced as his official replacement — they feel a good thing was able to come out of the situation.

“It was hard, everyone saw it,” Guthrie explained. “We all went through it, but you know as you say, something really lovely and positive has happened. And I think that’s where we’re focused and we have the best staff.”

The women then praised everyone working on Today.

RELATED VIDEO: Ann Curry On Her Reaction To The Matt Lauer Scandal: “I’m Not a Vengeful Person”

Guthrie and Kotb’s friendship has even made its way off-camera, with the pair having a “ladies’ night” to celebrate their first week of hosting together.

Speaking exclusively to PEOPLE, Kotb and Guthrie previously revealed how they leaned on each other in the wake of Lauer’s shocking dismissal — which they broke together on air.

“I think you could see from the moment that the news happened that our hearts were broken, and in lots of ways, they still are,” Guthrie said. “That feeling was shared through our whole newsroom and our whole Today show staff, because it sounds like cliché or a promo line, but it happens to be true: We are family, and we do love each other, and families do go through hard times, and when that happens in good families, you just get closer.”

“We were just trying to make it through those days together,” Kotb added. “Sometimes when you go through something with someone, you see something special. I think that’s what happened.” 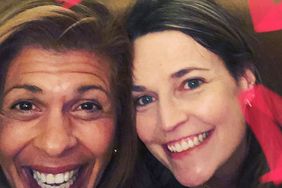