Wags will probably say it’s like watching paint dry, but Sarah Jessica Parker is co-producing an upcoming reality show that may do for artists what Project Runway has done for designers: make them cutthroat.

Parker’s production company, Pretty Matches, is joining forces with Magical Elves, the producers of Runway and Top Chef, for a new, as-yet untitled reality series that will pit 12 aspiring artists against each other for the chance to win a gallery show, a cash prize and a sponsored national tour, reports Variety.

Each episode will have hopeful contestants focusing on a specific discipline, such as sculpting, painting or photography. Their efforts will then be critiqued by their on-screen rivals, as well as appraised by a panel of top art world figures. While one artist will triumph, another will be sent home.

Van Gogh would probably have given his ear to be on it. –Caris Davis

Tell us: Will you watch Sarah Jessica Parker’s reality show about artists? 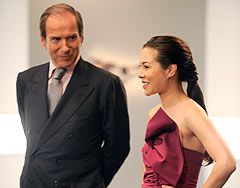