The couple that votes together, stays together.

Sarah Hyland and her fiancé Wells Adams spent one part of their anniversary in a political way — by voting in the 2020 presidential election.

Speaking to PEOPLE ahead of her Wednesday hosting gig at the 2020 CMT Music Awards, the 29-year-old actress says that she and her Bachelor nation beau, 36, performed their duty as citizens of the United States and voted in the upcoming election on their third anniversary last Thursday.

"On our anniversary, we sat down ... and had all of our ballots and research laid out before us," the Modern Family star tells PEOPLE exclusively. "We filled out our ballots and walked our ballots over to the official dropoff box and triple-checked to make sure that it wasn't one of the fake ones that are lying around California."

She adds, "And then Wells cooked us dinner and we exchanged gifts and that was that."

Sarah Hyland on Postponing Wells Adams Wedding: 'There Are More Important Things to Worry About'

Hyland, who has never been one to shy away from getting political in the past, shared a video from her time voting in an Instagram post on Thursday.

Set to an upbeat track originally crafted by Lizzo that tells listeners "It's time to vote" on repeat, the black and white video finds the actress stepping out from her house and making her way down her street to submit her ballot.

Donning a "VOTE THEM OUT" t-shirt that pays tribute to the late Ruth Bader Ginsberg — who died due to complications of metastatic cancer in September — Hyland also showed off her "Phenomenal Voter" hoodie that she had tied around her waist. The actress also sported a vote-themed hat and pair of socks, as well as a matching vote mask amid the ongoing coronavirus pandemic.

"Today I exercised my rights as an American citizen," Hyland captioned her post, before adding, "It was fun. It was easy! Remember that voting doesn't start Nov 3rd, it ENDS Nov 3rd. Vote early if you can!!!"

Elsewhere, on social media, Hyland and Adams both paid tribute to their years-long romance with touching anniversary posts on their respective Instagram accounts.

"A kiss, two VERY professional models, and an anniversary: A series ❤️," Hyland began the caption to her post. "Three years ago I asked you when YOU were going to ask ME to be your girlfriend. Now we’re engaged and in the midst of surviving a global pandemic."

She continued, "There’s no one else I’d rather be quarantining with. Being with you literally 24/7 over the past several months has only made our relationship stronger and I’m so lucky to call you my fiancé."

"I love you to Pluto and back!" she added. "Happy anniversary sugar balls 😜"

In his own black and white social media post, Adams kept it short and sweet when honoring his love.

"Happy anniversary sugar t---!" he began his post. "The list of things I love about you is longer than my tongue 😛😬"

"love you +1 anything you say. @sarahhyland," he added.

In the comment section of the shot, Hyland replied back, "Not possible!" alongside a laughing emoji and one blowing a kiss.

Adams and Hyland, who got engaged in Fiji in July 2019, previously told PEOPLE earlier this year that they aren't tying the knot just yet.

"I think right now there are more important things to worry about," Hyland told PEOPLE of postponing her wedding to Adams due to the COVID-19 pandemic.

"We definitely want to get married one day and have the wedding of our dreams and have everybody that we love there," she said. "But we postponed wedding planning because we want to be able to focus on what's important right now, and that's helping to spread information to wear masks and to only go out for essential needs and also take a really big look inside yourself and reflect on how you treat others."

"There's a lot of learning, and I'm really more focused on political things rather than wedding things," she added. "There is a lot going on in the world right now and that's what we should be focused on." 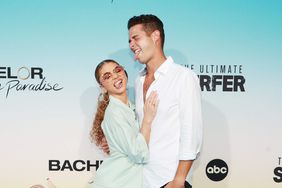 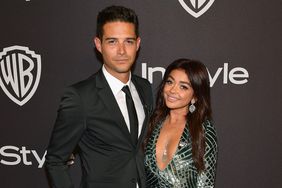