The five-time Olympic gold medalist will play himself in an Oct. 29 episode of the primetime teen drama

Going along with Ryan Lochte’s expected big move to Los Angeles, he’ll be featured on the show named after the city’s most prominent zip code.

The five-time Olympic gold medalist, 28, will play himself on an episode of the CW’s teen drama 90210 on Oct. 29, the network announced Tuesday.

This will be a step in a different direction from what was expected by the professional athlete, who has expressed interest in doing reality TV such as Dancing with the Stars.

“When we found out Ryan Lochte was going to be in town and might appear on 90210, we felt like we’d won a gold medal,” the show’s executive producers Patti Carr and Lara Olsen said in a joint statement. “Team USA are all-stars in our book, and we’re so excited he’s making an appearance on the show.”

Lochte won’t be featured in his usual environment – the pool – but instead will show up at a resort where characters Naomi Clark (AnnaLynne McCord) and Max Miller (Josh Zuckerman) are visiting to help strengthen their relationship.

“We only wish the episode was a surf event so we could have gotten [Ryan] in the water,” Carr and Olsen say. “But he deserves a little rest on dry land.” 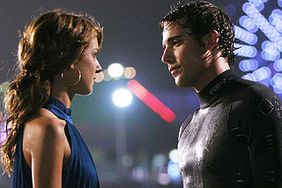