Rutina Wesley is showing off some new bling.

The True Blood alum, 38, appeared to announce her engagement to New Orleans-based culinary guru, Chef Shonda, in an Instagram post. The series of photos opened with a quote that reads, “Overthinking is the biggest cause of our unhappiness. Keep yourself occupied. Keep your mind off things that don’t help you,” followed by snaps of the couple. The final pic showed a diamond ring on Wesley’s finger.

The actress, who stars as Nova Bordelon on the Oprah Winfrey-produced drama Queen Sugar, has been posting several photos of the couple in recent days along with romantic quotes.

Wesley filed for divorce from ex-husband Jacob Fishel in August 2013, ending their marriage of nearly a decade. She cited irreconcilable differences. 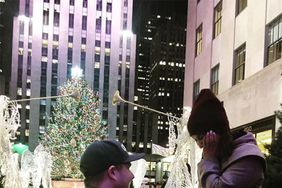