Riverdale commenced its fourth season by addressing the absence of Fred Andrews, played by Luke Perry who passed away in March

The start of season 4 of Riverdale was a somber one with the premiere serving as a farewell to Fred Andrews and, of course, Luke Perry the late actor who played him.

Perry — who shot to fame as a teen heartthrob on Beverly Hills, 90210 — died suddenly in March at the age 52 after suffering a stroke.

The episode starts off with the lovebirds Archie (KJ Apa) and Veronica (Camila Mendes) and Jughead (Cole Sprouse) and Betty (Lili Reinhart) in the midst of summer, where it seems so much time has passed that hearsay of Gryphons and Gargoyles no longer exist.

While the four friends sit in a booth at Pop’s as they normally do, Archie receives a phone call from his father’s number. He gets up to walk away from the table where he proceeds to drop his phone and fall to his knees.

Molly Ringwald returns to reprise her role as Mary Andrews, Archie’s mom, to help out around the house and with funeral arrangements.

Seeing that Fred died in Cherry Creek and with the national holiday around the corner, his body won’t be transported back to Riverdale until after the Fourth of July.

That night, Archie has a nightmare and wakes up with the sudden impulse to drive upstate and pick his father up as he cannot wait until after the holiday.

“I have to go get my dad, I have to bring him home,” he tells Veronica. He then asks her, Betty and Jughead to accompany him as well.

When they arrive in Cherry Creek, Archie is having difficulty coming to terms with the fact that his father is gone and wants to see his body to be sure it’s him. Though he changes his mind last minute and asks Betty and Veronica to go instead.

The two girls confirm Fred’s identity, and the man in charge of the funeral home says it will take a few hours for him to prepare the body. Archie looks to Jughead to write his father’s obituary for The Riverdale Register.

As they gather Fred’s belongings, Archie looks for his dad’s car keys to find the vehicle, which is still parked on the street somewhere. The four teenagers drive to the truck, and Archie walks towards it, sits in the driver’s seat and looks through his father’s personal items longingly.

Then, a car pulls up behind the truck and a mystery woman (played by Perry’s real-life friend and 90210 costar, Shannen Doherty) comes out. Doherty’s character was with Fred when he died.

Fred had pulled over to help her fix a flat tire and was struck by passing car. He died a hero, she told Archie, as Fred had pushed her out of the way just in time.

Archie and his friends then pick up the body and head home, where they are met by new sheriff F.P. Jones (Skeet Ulrich), who wants to honor Fred by giving him a police escort back to the house.

As the cars make their way down the main town road, Archie and Veronica look out and find that all of Riverdale, even those they are at odds with including Cheryl Blossom (Madelaine Petsch) and the Serpents, have come out to pay tribute to Fred’s life with a parade of their own, with signs that say, “Welcome home, Fred,” and “We will never forget you, Fred.”

At the funeral, Archie delivers a tearful eulogy to a crowd of grieving family and friends. “My dad was here for every high and every low. He’s the greatest man I’ve ever known. It hurts me that I never got to say goodbye,” he says. “But his spirit and his memory lives on in this town and in everyone he’s met. Fred Andrews will always be a part of Riverdale. I love you so much, Dad.”

When Veronica approaches the woman in charge of the funeral arrangements, she is taken aback to hear that the steep bill has already been taken care of by her own father, Hiram Lodge (Mark Consuelos), who is currently in jail along with Veronica’s mother Hermione (Marisol Nichols).

As the tribute episode nears its end, Jughead is seen sitting in front of a blank document on his laptop titled “Frederick Arthur Andrews, In Memoria,” pondering fleetingly before he starts typing.

“How do you sum up the life of a man like Fred Andrews?” the aspiring writer starts, as a tear rolls down his face. “He was a good samaritan, our knight in flannel armor.”

As Archie’s best friend narrates, every character in Riverdale is seen picking up The Register and reading the obituary, which brings most of them to tears, including Hermione, with whom Fred had a short fling with earlier in the series.

“Fred left Riverdale better than when he found it. That’s his legacy.”

The last scene shows all the main characters gathering around Archie’s backyard and lighting fireworks for Fourth of July to commemorate the time Archie was a young boy and Fred bought enough fireworks to “burn a house down.”

Riverdale airs Wednesdays at 8 p.m. ET on The CW. 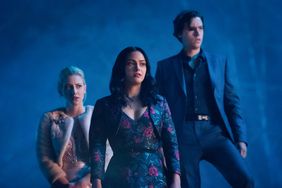 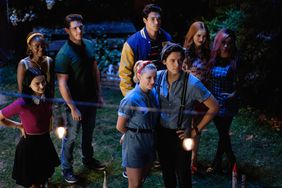