The high school sweethearts got married for the first time in 2005, before divorcing in 2012

Real Housewives of Potomac star Robyn Dixon will be getting married (for a second time) to Juan Dixon!

The couple got engaged on Friday, during a holiday wrap party for season 5 of the Bravo reality show. Although neither Robyn or Juan has posted about the engagement, many party guests hinted at the good news — and even shared photos where Robyn’s diamond ring is clearly visible.

“@robyndixon10 Holiday Party. Always a good time!!” wrote pal Erana Taylor, alongside a photo in which a smiling Robyn can be seen with the diamond sparkler on that finger.

“Great holiday party Robyn Dixon! Full of fun and surprises!” added Dr. Vicki Irvin, alongside a series of snaps from the bash, to which Robyn replied with a series of dancing emojis.

Reps for Bravo did not immediately respond to PEOPLE’s request for comment.

Robyn and Juan’s relationship has been documented extensively over the years.

Juan, a former professional NBA player, first proposed to Robyn, who is his high school sweetheart, in Oct. 2005 during a trip to Miami Beach when he wrote out “RB – Will you marry me?” in the sand, according to the Baltimore Sun.

The couple would go on to wed that July and welcomed two sons before divorcing in 2012, although they continued to live together for the sake of their family.

Slowly, over the years, the pair rebuilt their bond and during the last season of the Bravo reality series, Robyn revealed their relationship had turned a corner and they were doing it “like bunny rabbits.”

And during a June episode of Watch What Happens Live with Andy Cohen, the mom of two also revealed that she wasn’t bothered by all of the questions people have about her relationship.

“I appreciate their concern,” she said. “I take it as love.”

The reality star also confirmed that the pair had “talked” about getting remarried, much to the delight of Cohen. 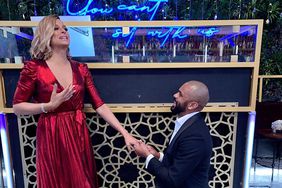