Newcomer Mia Thornton organized a group lunch as “a place for healing,” during the most recent episode of The Real Housewives of Potomac

Could Gizelle Bryant and Karen Huger finally be burying the hatchet?

During Sunday's episode of The Real Housewives of Potomac, the two reality stars appeared to take a step towards reconciliation after feuding all season — and for many seasons prior. The moment was orchestrated by new cast member Mia Thornton, who set up a goddess-themed luncheon for all the housewives.

At one point in the meal, Mia, 36, asked everyone to go around and say one thing they love about each other, a tall task for some given the many tense relationships at the table — Candiace Dillard Bassett and Ashley Darby had been fighting, as had as Robyn Dixon and Dr. Wendy Osefo, Gizelle and Wendy, and, of course, Gizelle and Karen.

When it came time for Gizelle, 51, to exchange niceties, she initially rejected the exercise while addressing both Wendy and Karen, 58.

"Well, everybody here knows Karen and I are not in a good place, so I have nothing nice to say," she began before turning to Wendy. "Wendy, we obviously have not talked, you're obviously still angry... I haven't heard from you."

"I haven't heard from you," said Wendy, 37, who had an explosive fight with Gizelle during a group trip after she found out that Gizelle had been discussing blog rumors about Wendy's husband Eddie having an affair.

"Gizelle did say at the dinner, you weren't there, that she doesn't believe what the blog said," Mia told Wendy at lunch, in defense of Gizelle.

"Thank you. All that happened after that — now that you know that I was defending your husband — was like from outer space and you don't want to take any accountability," Gizelle said, referencing Wendy's behavior during the big fight.

Wendy, however, said she wouldn't apologize. "I will defend my family with every fiber in my bones and I am not sorry for that," she said. "What I'm saying to you is at the core of this, I still feel as though, if you were my friend you would have come to me first."

Wendy, more open than before, replied, "Yeah, I receive that," much to Mia's delight.

"So are you guys good, are we good?" Mia asked, to which Wendy responded, "I'm okay," and Gizelle acknowledged, "It's a step."

"I don't know if there's any bouncing back with Gizelle, I think it's, 'let's play nice for now,' but I think it's temporary," Wendy added in her confessional.

After (sort of) making up with Wendy, Gizelle added in a customary jab at Karen — "But just for the record, as far as like, 'oh Gizelle's around here trying to destroy families' that's not me, that's Karen," she said.

"Remember this is the place for healing," Mia warned.

Ultimately, however, it was the insult that led to Gizelle and Karen working through some of their past issues, notably Karen's comments last season about Gizelle's relationship with ex-husband Jamal and the cheating rumors he faced.

"I have to say this because I've been thinking this for a while about what happened with Jamal, and the things that were brought up and I wonder if maybe the way that all that stuff came out and the people that were talking about it — Karen was included in that — if that had anything to do with you and Jamal kind of going your separate ways," Candiace, 34, asked Gizelle.

RELATED VIDEO: Gizelle Bryant Defends Herself After Saying RHOP Viewers Will She Her Get Blamed for Everything

"No, that wasn't new information for me," she said, referencing Jamal's infidelity that was brought up during last season's reunion when former cast member Monique Samuels brought out her "binder of shade."

"Okay, about the girl, the woman?" Candiace clarified, asking Gizelle why she didn't say she already knew at the time.

"Because I decided I was gonna let Karen show her a—," she said.

"I knew, months and months prior to the binder showing up, but I'm never going to engage with someone that has done research and thinks that they're going to tell me about my life," Gizelle said in her confessional, adding that Jamal was the one who told her about the cheating first.

Gizelle then opened up to Karen about how her comments about Jamal affected her family.

"You went on a diatribe as far as Jamal is concerned. And yes, my children happen to be his, and consequently it did hurt me and my children, badly," she said, to which a surprised Candiace said, "Really?"

Karen, however, wasn't buying it just yet, accusing Gizelle of twisting the story.

"She did say that she was hurt," Candiace chimed in. "I've never heard this b— say she was hurt about nothing, and her children were hurt."

She continued, "Gizelle, I'm very proud of you for expressing your feelings, because I feel like in general, you don't do that a lot, so like thank you for being open, I think that's wonderful."

"For so many years I felt like Gizelle just was not capable of truly expressing her vulnerable feelings," Candiace told the cameras. "This is a breakthrough."

Then came the apology at last. "Unfortunately, Gizelle and I are not in a position that we can talk to one another, but for my part in that, if it hurt her children, I'm sorry," Karen said, avoiding Gizelle's gaze.

"Who are you sorry to? Cause she ain't looking at me. If you're going to f—ing apologize, apologize to me," Gizelle said. "Apologize to my Black a—."

"Hold on. If this is what you want and it's about your children: I apologize," Karen then said — looking directly at Gizelle this time.

"To who?" Gizelle asked Karen, who said, "Your children and you."

"Okay, it's the first time she's ever apologized to me," Gizelle commented as the table did a round of applause.

"For that, I apologize. I don't mess with people's families," Karen said, adding in her confessional, "I love children. And if she said her children were hurting, they deserve that grace, and that's what makes me a better person than Gizelle: I'm capable of being compassionate."

Karen then asked Gizelle for an apology of her own, for previously making a comment about Karen's husband Ray that she interpreted as her "wishing death" on him.

"I'm going to offer one moment to you Gizelle, because you've brought your children up. Can you at least acknowledge that you chose the wrong word? Because I know it's hard for you to apologize," Karen said.

"So I don't have a hard time apologizing because I have apologized to you," Gizelle said, as her claim was proven by a reel of her apologizing to Karen in the past.

"So, I would like a clean slate with Karen," Gizelle said. "I would like for us to not have a Battle Royale every time we're together with the group, you know, my verbiage and things I've said, have never meant to hurt your family, it is what it is."

"I'm not finished talking — when I'm on a roll, dammit, I'm on a roll," she said. "This group is special and so I feel like a clean slate needs to be, let's just try to move forward in the spirit of respect."

"Thank you, that was beautiful," Mia said, before teasing to the cameras, "Hell has frozen over."

"I'm happy that we are resetting," Karen shared.

"A hug maybe?" Ashley suggested, but that was going a little too far for both Karen and Gizelle. 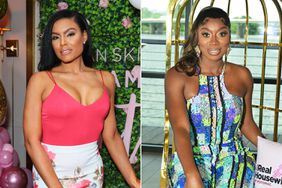