Eboni K. Williams and Ramona Singer clashed over the subject of politics

On Tuesday's episode of The Real Housewives of New York City, Eboni and Ramona found themselves in another tense conversation surrounding race and politics.

The drama started after Eboni, 37, tried to ask Ramona, 64, how she felt about the 2020 election (at the time of filming, votes had been cast but Joe Biden had not yet been declared the next president). When Ramona said she didn't want to talk or think about politics, Eboni stressed that it was important to discuss the subject, given how "divided" the country is.

"Can we just change the subject?" Ramona said. "I'm going to take a step away because you know what, I don't want to do this. I like you. I don't know you that well, I feel like you're teaching me, you're preaching me."

After walking away, Ramona said during a confessional that she felt like Eboni was trying to "educate" her. But in her own interview, Eboni explained she was simply trying to find a way to "connect" with Ramona.

When Ramona returned, the situation escalated after Eboni told Ramona that it was her "privilege" and "white female fragility" that was allowing her to ignore the current political climate.

"I'm telling you that I want to have a real friendship with you Ramona because I like you," said Eboni. "But you can't like me only when I say the things you want me to say."

Ramona said that while she also wanted a genuine friendship with Eboni, she didn't want to talk about "race, religion or creed."

The conversation between Eboni and Ramona took place days after Eboni invited the group — including Luann de Lesseps, Sonja Morgan and Leah McSweeney — to a party in Harlem, where she taught them about numerous important, historical Black figures.

"Well then you know what, you need to back off a little," said Ramona. "The other girls aren't feeling really good about this, they feel like you're lecturing us."

"They should be big girls because everybody is an adult and they should say how they feel," said Eboni. "You can't tell me not to talk about how I feel."

"You're too heavy for me right now," said Ramona, still frustrated by the conversation. "This is too serious of a conversation when I just want to enjoy my life. I want to escape for 24 hours."

Eboni, who joined the cast of RHONY as the show's first Black Housewife, explained that because she's Black, she does not have the luxury or "privilege" of "escaping" reality.

"Do you have a coat closet for my Blackness, Ramona?" Eboni asked after saying she couldn't "take off" her skin.

"I'm feeling I'm being attacked," Ramona replied. "I really tried to understand and I took things in."

But when Ramona mistakenly called C.J. Walker "E.J. Walker" while making an attempt to show how much she'd learned about Black history, Eboni pointed out the slip-up.

"Oh whatever," said Ramona, standing back up. "I gotta go now. I'm going."

"How about saying, 'You know what Ramona, that is admirable that you knew the first millionaire woman was a Black chick' instead of correcting me like a teacher," she continued. "You're not getting it right now."

Exasperated, Ramona said she felt like Eboni was "picking on" her for "no reason."

But after taking a second to calm down, the two women came to an understanding and hugged it out.

"I'm not a big, scary monster, you crazy lady," Eboni said playfully. "I don't want to feel like we have a no-fly zone."

"I'm not going to treat you with kid gloves and fragility because you're a strong white woman," she added.

"And you're a strong Black bitch," said Ramona.

This isn't the first time Ramona has been caught up in a racially-driven conversation on RHONY. Earlier this season, Eboni confronted Ramona after she used the term "the help" to refer to the house staff she hired in the Hamptons.

Eboni said it was "the terminology and seeing people as less than" that rubbed her the wrong way.

The two eventually talked and cleared the air after discussing the intent behind the phrase.

"The 'help' comment was a little triggering for me," said Eboni. "I think historically in our country, the 'help' can make people feel devalued."

"I love the fact that Eboni, in a non-condescending way, is explaining to me the reason why that word isn't cool," she said. "I get it. I'm not stupid, but sometimes I have a slip of the tongue." 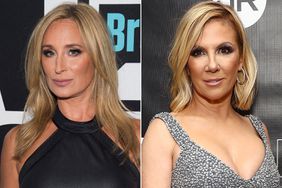